It's no secret that Zaytinya is a DC hotspot, but it's turning up the heat a notch over the next few weeks.  Today through September 22, it hosts the Greek Modern Festival—featuring an array of innovative mezze dishes from chef Christoforos Peskias of 48 The Restaurant in Athens (that's Greece, not Georgia!). He and his pastry chef, Theodoros Moisides, are partnering with celebrity executive chef Jose Andres and head chef Mike Isabella to bring a taste of modern Greece to DC.

Expect the unexpected—the asparagus wrapped in Manouri cheese is paired with an asparagus gelee that tastes more asparagus-y than the real thing!  And the shoulder of baby lamb served with horta and avgolemono almost rivals our usual Zaytinya staple, Hünkãr Begendi.  Desserts also surprise—what may look like an ordinary chocolate mousse packs a burst of nutty flavor; a scoop of seemingly standard sorbet soon reveals its fragrant rose water center. 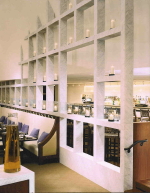 Wash everything down with a specialty Greek cocktail or wine.  You can travel to Greece without leaving your barstool by sampling a wine flight including Evharis Eva Sparkling Moschofilero, Hatzidakis Assyrtiko Santorini 2007, Dalamara Xinomavro Naoussa 2002, and Samos Muscat of Samos Vin Doux.

Those in the know (a.k.a. greglistdc readers!) have already made their required reservations for the celebratory party tonight, attended by guest Chefs Peskias and Moisides and featuring samples of Greek wines and hors d'oeuvres. And the more ambitious among us will join chef Isabella at the FRESHFARM Market on Thursday as he demonstrates simple, modern Greek recipes using seasonal market produce.