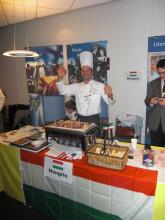 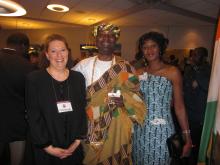 Written by Anita
March 7, 2009
True Francophiles (and a host of others who just enjoy a great party!) gathered on Friday evening to celebrate La Grande Fête de la Francophonie held at La Maison Française. This annual event (featured on GregsListDC!) showcases the food, drink, music, and culture of almost 40 French-speaking countries. It also helped to kick off the 2009 Francophonie Cultural Festival, which runs until April 3, and includes a jam-packed schedule of films, concerts, seminars, and children’s programs. We’ve already dusted off our dance shoes for the Discothèque Underground) with DJs Jay Style and Evâa Pearl (open bar and light snacks too!) on April 3. And we’ll need to dance up a storm to work off the Grand Fête’s offerings—menu highlights included fragrant spinach sauteed with onions and spices from the Democratic Republic of Congo, rich Blue Benedictin cheese made by Benedictine monks from Québec, and Pastetom—a pork pâté filled with prunes, wrapped in bacon, and dressed in a homemade strawberry jam sauce from Hungary. Although most of the crowd went for the exquisite mini-pastries from France, our personal favorite dessert was Lakiri—a sweet, couscous-like dish mixed with yogurt sauce from Guinea. As usual, an assortment of wines, beers, and traditional drinks were available to wash it all down. Given the event sold out in advance (as it almost always does) we would be remiss if we didn’t tip you off to the timing of next year’s fête—it’s usually the first Friday in March—so stay tuned to GregsListDC for updates as the date nears. Fait accompli? Fête accompli!
Spotlight Type:
Food Reviews