Bethesda Takes a Seat at "The Front Row" 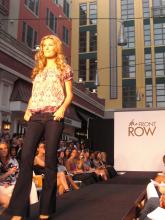 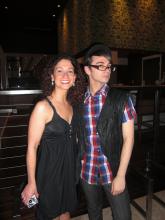 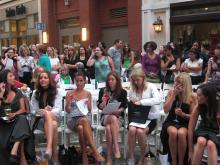 The fashionable weekend kicked off with a "Fierce" Thursday happy hour at Redwood Restaurant and Bar, in the Bethesda Row fashion district, where we partnered with CityShopGirl, the local website that sends regular e-mail alerts to readers about discounts at area restaurants, boutiques, stores, and spas.

After happy hour (okay it was 10pm, so slightly past) we were off to see the Emperor…that would be the screening of the documentary film, “Valentino: The Last Emperor,” at the Landmark Bethesda Row Cinema. The film, produced and directed by Matt Tyrnauer, a Special Correspondent for Vanity Fair magazine, takes a rare intimate look into the opulent world of the legendary Italian fashion and Haute Couture designer, Valentino Garavani. After Tyrnauer answered questions in a brief Q & A, we viewed the film, which also highlighted business partner and companion, Giancarlo Giammetti, and the incredible team behind the intensely guarded man known to the world simply as “Valentino.” Find out more about the film and future screenings here.

On that Friday, we were back at Redwood for a lovely reception, when who should make an appearance? Well, Mr. “Fierce” himself, Project Runway winner and Maryland native, Christian Siriano, of course! The pint size designer with the bold personality posed for pictures and schmoozed with guests who sipped “Hot Mess” martinis and other “Fierce” cocktails.

After the mini-soiree, we were ushered to the main event for the evening, The Front Row fashion show, emceed by Pamela Sorensen of Pamela’s Punch. The show featured Summer and Fall 2009 previews by Bethesda Row boutiques Ginger, Urban Chic, Luna, Wear it Well, Lucy, J. McLaughlin, and others. The gorgeous models, whose flawless hair and makeup were done by Salon Cielo and Blue Mercury, strutted (love that word!) down the runway in summer cocktail dresses, sportswear, jeans, and career wear from designers like Shoshanna (Urban Chic), BCBG (Luna), and Yoanna Baraschi (Ginger). A couple personal favorites: the BCBG Purple jersey blend maxi dress (Luna) and the Shoshanna Dolman dress (Urban Chic). To top the evening off, while marveling at the show, we were treated to an amazing dinner prepared by Redwood and sipped on wine and refreshing housemade cocktails.

The three-day fashion extravaganza, which featured celebrity book signings, trunk shows, and designer sales, concluded that Saturday with a booking signing by Lauren Goldstein Crowe, author of the biography, “The Towering World of Jimmy Choo.”

Alas, so much fashion, so little time! Many thanks to Redwood Restaurant and Bar, CityShopGirl, and Barbara Martin of The Patton Group. Of course, be sure to check Greg’s List DC for future Bethesda Row area boutique events including trunk shows, sample sales, and designer appearances!
Spotlight Type:
Fashion Reviews