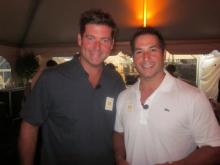 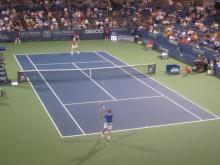 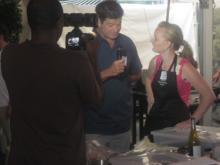 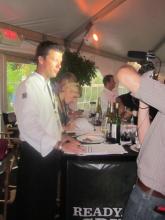 The Legg Mason Tennis Classic (featured on GregsListDC!) has become a DC summertime ritual.  Now in its 42ndyear, this unique tournament brings today’s tennis stars to the Nation’s Capital for a week of professional-level competition. But at this year’s tournament, we checked out a new event that will hopefully become another annual tradition: The 1stAnnual Beringer Great Steak Challenge.

Hosted by Jamie and Bobby Dean (Paula Deen’s sons and hosts of the Food Network show, Road Tasted), the contest first selected 100 regional finalists based on steak recipes that people from across the country submitted. Recipes had to be suitable for preparation on an outdoor grill in less than 30 minutes (including prep time!) and were judged on their taste appeal, Beringer wine pairing, and simplicity.

The DC-region finalists (which included competitors from Pennsylvania, New York, New Jersey, and Maryland) then prepared their recipes in front of gathered spectators and a panel of DC-area judges. We were rooting for 27-year-old Germantown, MD resident Mackenzie Severson, who deftly made a tender ribeye steak with rosemary white bean puree, fragrant tomato chutney, and a rich pinot sauce. Inspired by a surplus of tomatoes and rosemary in her garden, she developed the recipe specifically for the contest.

While things heated up in the grilling area, spectators sipped Beringer’s Founders’ Estate wines (we loved the crisp, fruity flavor of the Pinot Grigio) and sampled delicious small bites.

Judges Bart Vandaele (Belga Café), Melanie Alnwick (Fox 5), and Tom Valis (Washington Wholesale) sampled the contestants’ dishes and wine pairings to select a winner. Alas, despite Mackenzie’s best efforts, top honors went to Kimberlea Porterfield from Pulaski, PA for her inventive oyster rockfeller filets. She won a 4-day, all-expense paid stay for two at historic Beringer Vineyards and an appearance in the October 8 final, to be broadcast on the Cooking Channel. The winner of the national competition will earn a check for $15,000 and lifetime bragging rights!

Burned that you missed this event? Then mark you calendar now for the 2011 Legg Mason Tennis Classic, July 30 to August 7, and watch GregsListDC for details on the 2ndAnnual Great Steak Challenge!

We caught up with Jamie and Bobby Deen to discuss the Beringer Great Steak Challenge and life on the road.

Q: You will be judging the contest’s grand finale. What will you look for in the winning dish?

Jamie: Really? I thought they’d come up with someone better than me to judge!

Bobby: We’ll be looking for something unique. You can often get 2-3 page recipes, but we’re looking for simple and easily duplicated—that’s who we are. We want creativity too. We want people to know that an affordable wine and a steak can make an ordinary Tuesday night into something special.

Jamie: In Seattle, we met a guy with a recipe that had been in his family for 30 years! Simple, delicious food is what we’re looking for—I have a 4-year-old, so I know that simple is better.

Q: What is your fondest memory from your road trip?

Jamie: The last day when I didn’t have to share a room with my brother anymore!  Seriously though, everywhere we went we visited ballparks. We hadn’t really had a break since we first started, so we got Cubs tickets and drove to Chicago in August with the windows down because the car didn’t have air conditioning!

Q: We heard that you’re working on a new virtual cookbook based on your travels. When will that be out?