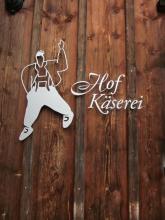 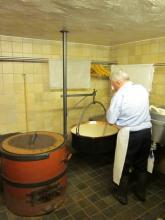 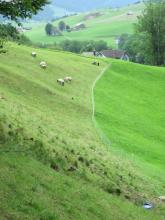 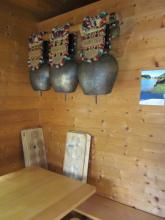 Little known fact: we have Swiss relatives. This explains why we spent several weeks this summer in the tiny village of Appenzell, best known for Appenzeller Swiss cheese. Dubbed “the spiciest cheese from Switzerland,” this full-fat, semi-hard cow’s milk cheese goes back over 700 years! While in Appenzell, we visited Hof Käserei in Weissbad to watch the Appenzeller cheese-making process.

Surrounded by lush green mountains dotted with picturesque farmhouses, Hof Käserei is a simple wooden cottage with a stone-and-wood floor and wood-paneled walls. Frilly red gingham curtains flutter in the windows as the well-worn Dutch door lets in the mountain breeze. It is here that the Käser makes the Appenzeller almost daily.

First, 92 liters of raw milk are heated to 32 degrees. After an hour, the Käser adds about 10 grams of cultures (rennett—made from cows' stomachs—lactic acid, and bacteria) to the milk. Over the next three hours, he carefully stirs the mixture skimming off the whey (molke). This by-product of the cheese-making process has become almost as important as the cheese itself—patrons at the country’s spas bathe in it as a therapeutic skin treatment.

Once the mixture is done, it is formed into molds and (20 hours later) is coated with a blend of salt, herbs, and wine. Only a few people know the secret recipe, which is handed down from generation to generation. The cheese then begins the aging process in a climate-controlled cheese cellar. It is treated daily with the herb blend of the first 10 days; 2-3 times a week thereafter. The mildest Appenzeller ages only about 3 months—more pungent varieties age longer.

True Appenzeller cheese must meet exacting standards. Elected officials test the cheese, making sure it has the right smell, taste, and appearance. Only cheeses scoring 18.5 out of a possible 20 points can be sold.

The completed cheese has a yellowish to reddish-brown rind.  Inside, it has a smooth, creamy texture with regular, medium-sized holes. It is used in a variety of traditional Swiss dishes, including fondue and cheese pie (Käsefladen), or is just eaten plain with chunks of warm bread.  Das ist gut!