Pizza for Every Constitution 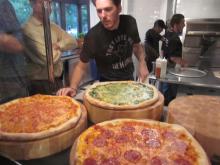 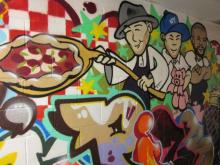 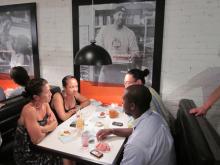 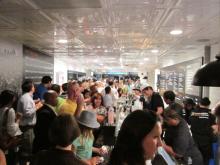 Hot on the heels of another steamy DC Fourth of July, chef Spike Mendelsohn (of Top Chef fame) and his business partner and friend, chef Mike Colletti, previewed their newest venture, We, the Pizza. Open to the public on July 22, the new restaurant (next door to Good Stuff Eatery) will serve NY-style pizza (by the slice and by the pie), pasta, subs, wings, housemade gelato, and Italian sodas.

The pizzeria emphasizes regional, farm fresh ingredients. We loved the mushroom pie—chefs Spike and Mike takes a béchamel base, add roasted mushrooms, truffle juice, and fresh truffles to make a hearty pie.  The Buffalo chicken pizza’s toppings include chicken from spicy boneless chicken wings, creamy blue cheese, shredded mozzarella, and “Miguel’s” special hot sauce that lends a real kick. The crust is the star here—after six months of research, chef Spike has come up with one that is thick and puffy on the edges, thin and chewy in the center. They have just the right mix of sweetness and saltiness and are slightly blackened underneath.

Our favorite gelato was the seasonal pink grapefruit—cool, refreshing, and perfect for the 100+ degree weather. But we can’t wait to try some of the menu’s gelato sundaes, like the Nutella Smores (creamy vanilla gelato, warm nutella, fresh bananas, and marshmallows, topped with graham cracker crumbs and fresh organic whipped cream) and the Amaretti Cherry (mascarpone and toasted almond gelato, amerena cherries, and amaretti biscotti crumbs, topped with fresh organic whipped cream and toasted almonds).

A soda counter complete with soda jerks (dubbed “fizzicians”) mixes up the tried and true classics (like sassy sarsaparilla-fras soda) and the soon-to-be classics (like the good morning Vietnam coffee soda.)

Staff t-shirts sport the slightly modified Lennon lyric, "All we are saying, is give pizza a chance." Want one for yourself? Two lucky GregsListDC Facebook fans will win one in time for the grand opening, along with a Batch 19 ballcap. (Update: Congrats to Ben Droz and Mildred Moreno!) Not already a fan? Then click here and “like” us today!

p.s. Want more? You also can click here to see Millionaire Playboy's video of chefs Spike and Mike's antics in the kitchen!

We chatted with chef Spike about the development and concept of his newest venture.

A: It’s America’s favorite food. And I love it!

Q: What did you learn during your tour of NYC pizzerias?

A: I learned about flavoring, ovens, heat, flour—It’s not like doing French food. Everyone’s willing to share info.

Q: What makes your pies special?

A: All the hard work that went into them—we put six months into dough research. They have a really nice thick crust on the edge and they’re thin in the middle. The toppings are technically better than most pizzas in DC too.

Q: Explain the community concept behind “We, the Pizza.”

A: I’m tight with my family and Mike—it just fits us. We, the People= We, the Pizza. I’ve been inspired by DC and the Hill. All the staffers come in and it’s just great. It made me think about what I could do for the community—I do a lot of charity now.  I’ve adopted the KIPP Academy and I make pizzas with Horton’s Kids after school.