Lobster Rolls into the District 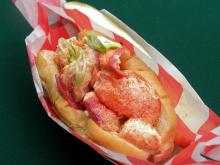 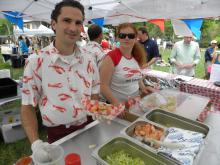 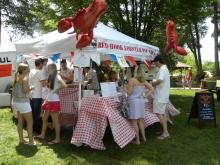 It’s no secret that we’re suckers for lobster. Heck, last summer we even trekked to the Maine Lobster Festival to get our fill of the crusty crustacean. But this year, we can stay at home and have the taste of New England come to us when the Red Hook Lobster Pound truck rolls into the District.

We spoke with Doug Povich, a DC technology and telecommunications lawyer (and also co-owner Susan Povich’s first cousin), about the venture at one of its early (truckless) stops at the Landon Azelea Garden Festival. The business is indeed a family affair (hailing originally from Maine), and Doug has been key to helping it come to DC. The Red Hook Lobster Pound hopes to build on the success of its NYC outlet that has been selling live Maine lobsters and prepared lobster rolls to throngs of hungry shoppers at the Brooklyn Flea since last summer.

Try the authentic Maine lobster roll platter—plump lobster claw, knuckle, and tail meat lightly tossed in chilled lemon mayonnaise, topped with diced celery and scallions, and loaded onto a fluffy butter-grilled, top-split J.J. Nissen bun. Or opt for the Connecticut variety (our personal favorite) the same delicious lobster parts sautéed in butter and topped simply with crisp scallions. Pricing is not yet set, but Red Hook Lobster Pound hopes that it can swing $15-$16 for a roll with chips and pickle spear. Other offerings may include a shrimp roll, lobster bisque in the wintertime, and creamy lobster grits. The truck may even offer breakfast (a great reason to ROLL out of bed….)

Want to get your claws into some lobster rolls? Then catch up with Red Hook Lobster Pound at this month’s Capital Pride Festival, see if it makes a stop at Eastern Market, or wait until the truck hits the streets later this month. (Hint: You can follow it here on Twitter or Facebook.)