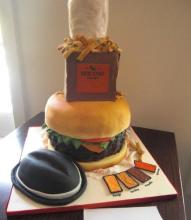 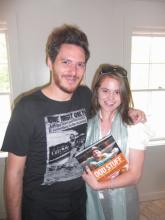 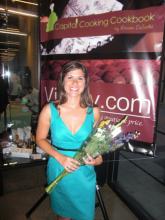 Summertime means more time for grilling and leisurely meals outdoors. So what better way to get things started than by digging into three meaty new homegrown cookbooks!

Want to meet the man himself? He’s usually at the restaurant or manning the grill at his weekly Spike’d Sundays pool party. As chef Spike explains, his restaurant’s (and cookbook’s) name comes from his grandfather, Sunny, who—whenever enjoying something good in life—would pump his fist in the air and declare “Good Stuff!” We couldn’t agree more....

Lauren DeSantis, host of the nationally televised show Capital Cooking and author of a well-recognized DC-area blog, recently released her own softcover volume, titled “Capital Cooking Cookbook” ($29.99 on Amazon or save 15% until Fathers’ Day by using discount code UGUKMJF7 here). The cookbook includes over 90 recipes from some of the DC-area’s favorite chefs as well as simple but delicious recipes for home cooking. Many of the featured chefs/restaurants dished up samples of their recipes at the cookbook’s recent launch party and book signing, including Pork Barrel BBQ’s succulent Oven-Smoked Pulled Pork (p. 66) and Embassy of Panama chef Ana Victoria Mas’s light and refreshing Shrimp and Fish Cerviche with Pixbae (p. 43).

Lawyer by day, TV host and cooking instructor by night (okay, maybe weekends), Lauren epitomizes the dual-hatted nature of many of us who cover the DC dining/food scene. You can catch Lauren’s show “Capital Cooking with Lauren DeSantis” on Comcast Channel 95 and RCN Channel 10 in DC, Cox Cable Channel 10 in Fairfax/ HCTV in Herndon, Access Montgomery TV 19 and 21 in Maryland, Dish Channels 9407 and 9396, and on a variety of local cable carriers, including Time Warner, Comcast, Insight, and NCTC. Capital Cooking airs every Thursday at 6 p.m. or online. Lauren also will be doing a cooking demo on Saturday at this weekend's Beer, Bourbon, and BBQ Festival.

Last but not least is the new 175-page e-book, “55 Knives: Recipes, Tips, and Stories from 55 Top Food Bloggers” ($18 for a .pdf file here). Spearheaded by local blogger Nick Evans of Macheesmo, it features contributions from some of our favorite DC-area food bloggers, including Mango & Tomato, The Arugula Files, and Modern Domestic. Each blogger’s chapter features one or two recipes—many of which can be sampled at the 55 Knives Launch Party (featured on gregslistdc) on June 24.

These cookbooks should give you plenty to sink your teeth into this summer!