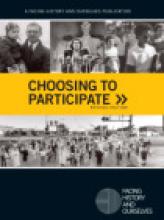 As a preview event to the “Facing History and Ourselves: Choosing to Participate” nationwide exhibit arriving at DC’s Historical Society on 17 January, Wes Moore, author of New York Times best-seller The Other Wes Moore: One Name, Two Fates, will speak about the power of education and public service at George Washington University’s Lisner Auditorium on Monday, November 15.

Facing History and Ourselves aims to provide educators, community leaders, and students with tools for teaching civic engagement, ethics, and responsibility through multi-cultural global perspectives on history. Since the organization’s founding in 1976, it has grown from a single office in Massachusetts to over 150 staff members in Chicago, Cleveland, Denver, London, Los Angeles, Memphis, New England, New York, the San Francisco Bay Area, and Toronto.  It has educational partnerships in Northern Ireland, Israel, Rwanda, and South Africa.

Facing History and Ourselves is seeking nominations for Washington-area individuals and groups who have chosen to take a positive stand and act on behalf of others, to be featured in the upcoming exhibit. Approximately 25 nominees will be selected for Upstanders: Portraits of Courage, a component of the Facing History and Ourselves: Choosing to Participate exhibition encouraging hundreds of thousands of people of  all ages to consider the consequences of their everyday choices.

Those chosen as Upstanders will have their story and a professional photograph displayed during the exhibition’s five-month stay at the Historical Society of Washington, DC and will serve as a reminder that ordinary people are capable of making decisions, large and small, that create positive change in our world.  To nominate an Upstander, Washingtonians are encouraged to describe in 300 words or less how their candidate has or is making a difference in the area community or around the world, and then submit a nomination by the extended deadline of November 15.

Facing History engages more than 1.9 million students annually through its network of 28,000 educators around the world and reaches the public and the broader educational market through community events and extensive online resources. It partners with an array of educational and cultural institutions, including the University of Pennsylvania Graduate School of Education, Public Broadcasting Service, and . The non-profit receives sector support from Department of State Bureau of Educational and Cultural Affairs, The Allstate Foundation, and Walmart, among others.

The Mount Vernon Square-situated Historical Society is an oft-overlooked local museum with some excellent current exhibits, including “East of the River, Continuity and Change,” a long-term look at the history of southeast DC, and Washington Sculptor’s Group, Porous Borders.  It is also host to local cultural events like the Hip Hop Cafe series.

In his book, Moore, like the upcoming exhibit, tells a tale of two young men born in similar neighborhoods of the same city but who grew up to live very different lives. Moore, who has appeared on NPR, Oprah, Charlie Rose, and Meet the Press, uses the contrasting stories of a Rhode Scholar and a convicted felon to underscore the impact of public servants, teachers, volunteers, and community mentors.

Who in DC do you know making a local or national impact?  Make sure that his or her story gets told.  Your Greg’s List DC Culture Editor has already nominated her favorite DC-based Upstander. Hurry and nominate your Upstander today!