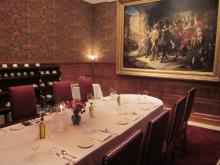 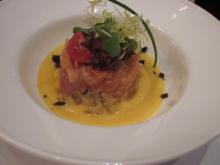 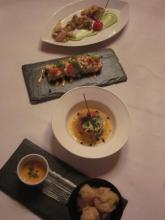 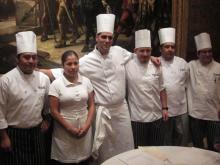 With all that’s new on the DC dining scene, it can be easy to forget restaurants with rich histories that have been around for decades. La Taberna Del Alabardero is one such place.

Luis de Lezama, a Basque Catholic priest, founded La Taberna Del Alabardero’s first location in a rented house in front of Madrid’s Royal Palace in 1974. Conceived to provide shelter, employment, and skill training to troubled and homeless youth, it quickly became a popular dining destination. Now with almost 20 restaurants across and stateside (in Seattle and DC), as well as several hotel and restaurant schools, Lezama has proven that you can do well by doing good.

Open since1989, Taberna’s DC location exudes charm. Crimson walls, ornate moldings, and rich cherry wood paneling give it an air of regal sophistication that is hard to find in today’s era of glass and plastic modernity. The Aranjuez private dining room is perhaps the most striking, with a large oil painting gracing one wall, plush high-backed chairs, and an embellished fireplace.

Want a taste of ? Then catch one of Taberna’s monthly wine dinners (the next one is tomorrow!) or stop by its weeknight happy hour when tapas are half off (3-6:30pm).* If you’re in town for Thanksgiving weekend, be sure to make reservations now for the Flamenco dinner with performer Jose Barrios with guitarist Jesus Nunez. Or check out Taberna’s Spanish-style Sunday brunch (offered for the first time in 21 years!). Its November menu features dishes from ’s Cantabria region.