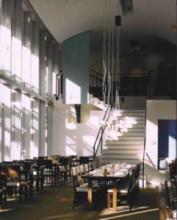 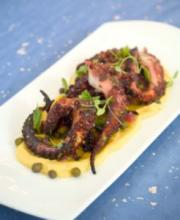 This is a tale of two Mediterranean restaurants: one a relative newcomer to the DC dining scene; the other an established force since 2002. AGORA (which means gathering place in Greek) is the latest endeavor of Latif Guler, director of operations at Masa 14. Zaytinya (which means olive oil in Turkish) is the brainchild of celebrity chef Jose Andres and ThinkFoodGroup.

Each space has its own distinct personality: Latif helped to design AGORA, with its exposed brick, visible ductwork, and cement floors. Zaytinya, designed by the architectural powerhouse, Adamstein & Demetriou, is sleek and modern—bedecked in pristine white and subtle oceanic blues.

Each restaurant also draws on considerable culinary expertise. AGORA executive chef Ghassan Jarrouj has been cooking Mediterranean cuisine for over 35 years—most recently at Sitti in Raleigh, North Carolina. He also has served as a personal chef for US ambassadors to Lebanon and has cooked at both Neyla and Taverna Kefi (Wheaton, MD). During AGORA’s opening, chef Jarrouj was assisted by Turkish chef Hasim Guler, Latif’s father and owner of a resort and a variety of family restaurants in Foca, Turkey. Zaytinya executive chef Jose Andres has built one of the most solid restaurant empires in DC and recently added head chef Michael Costa to the Zaytinya team (following Top Chef alumnus Mike Isabella’s departure). Before joining Zaytinya, chef Michael Costa served as executive chef at Pazoin Baltimore, which earned a 3½-star review from the Baltimore Sun and a 3-star rating from the Mobile Travel Guide. His previous experience includes time at Michel Rostang in Paris, France and Michel Richard Citronelle and he was nominated “Chef of the Year” by the Maryland Restaurant Association in 2010.

Both restaurants greet you with hot-from-the-oven, balloon-like pita bread that releases a puff of steam when you tear into it (watch your fingers!) Spreads offer the perfect accompaniment—from flavorful Htipiti (marinated roasted red peppers mixed with olive oil, feta, and fragrant thyme) to rich Labneh (AGORA’s version of this strained yogurt dish is studded with diced apples, walnuts, peppery savory, and fresh endive; Zaytinya’s is mixed with the Middle Eastern herb and spice blend, zatar).

At AGORA, we couldn’t get enough of the octopus—plump and wild-caught, grilled to smoky perfection with parsley, capers, and red onions and bathed in olive oil, lemon juice, and vinegar. It is just as tasty as one of Zaytinya’s signature dishes, Octopus Santorini (grilled baby octopus with marinated onions, capers, and yellow split pea purée), which in now back on the menu after a hiatus in gratitude to Paul, the prognosticating German octopus (RIP), for predicting Spain’s World Cup win.

Hünkãr Begendi remains our all-time favorite dish at Zaytinya. Served in a copper vessel, this tender traditional Turkish braised lamb shank swims in smoothly decadent eggplant-kefalograviera puree. We can’t wait to try AGORA’s version of the same dish (made with gruyere rather than kefalograviera).

The happy hour and late-night crowd will find something to appreciate at both establishments. AGORA’s weekday happy hour in the bar area (3-7 pm) features Bacardi and Stoli drinks for $4 and Efes Pilsen, Mytos and Stella Artois beers for $3.  Flatbreads and spreads also are offered for $4. Late night specials (after 11 pm) include Bacardi and Absolut drinks for $4 each and Stella Artois draft for $3. Zaytinya’s Mezze Ora in the bar (4:30 pm to 6:30 pm, Sunday through Friday and 10:30 pm to 11:30 pm on Tuesdays, Wednesdays, and Thursdays) offers pomfili and Yuengling draft beers, Almaza bottles, select wines, and mezze specials for $4 each. Finally, both offer outdoor seating in warm weather.