A Vote for Even More Out There 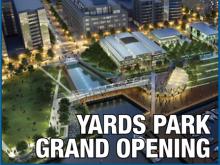 With school back in session and fall events in full swing, it’s tough to pick from among the many enticing cultural options.  One thing is clear to your native Washingtonian Greg’s List – DC Culture Editor--this city is on a serious cultural roll.  Andrea is thrilled to give DC government, arts events organizers and venues, and their generous private sector supporters a well-earned Culture section spotlight A+ for tangible strides in promoting the city’s arts scene.  Arts, outdoor green spaces, films, and festivals have reached an unprecedented level.  More importantly, they are serving as an agora for a traditionally more segregated city, bringing together diverse backgrounds, as well as persuading many who might have left the city--but have much to contribute–to settle here, with their families, for good.

This summer’s outdoor film festivals were a case in point.  I counted no less than nine different summer film festivals in the area, chronicled in my last spotlight review.  But the cinematic culture will not be relegated to “what we did last summer;” other series are just taking off.  In particular, we are grateful for the Wilson Pix on the Plaza, which will screen one of my personal faves, Footloose, in just a few weeks.  The Freer Gallery and National Gallery of Art, East Wing are running a Paris Asia series, highlighting several Korean-Parisian influenced works and new generation Mexican filmmakers respectively.

The weekend began early on Thursday night with a Cultural Landscape Foundation What’s Out There Launch Party in Room & Board’s newest spacious showroom.  A warm welcome to the neighborhood, Room & Board! Greg’s List - DC seriously digs your rooftop deck, not to mention your sleek, modern furniture.  Friday had arts-goers hopping between regular first Friday openings in the Penn Quarter vicinity, the Pinkline Project’s Arts on Foot Alternative Space Opening, a grand re-opening of DC arts backbone, the Touchstone Gallery, the last Jazz in the Garden of the season, and the DC Shorts Festival Opening Bash (featuring Grammy-nominated Hip-Hop Artist Christylez Bacon).

Art Whino coupled its latest artsy social gathering, Beautiful Minds, with the grand opening of a fabulous new Southeast DC space, The Yards Park, in the Capitol Riverfront district.  Several of the city’s most popular new food trucks, including the Greg’s List – DC recently reviewed Eat Wonky, were onsite to feed the culture and gastronomy-hungry crowds.  Even if you missed The Yards Park inaugural fireworks on the 11th, the space is worth a visit, preferably in early evening with a picnic basket in tow.  Note some serious romantic rendezvous potential and friendly guards who secure the Chicagoan landscaping and architecture. The new space is just the latest addition rendering Southeast virtually unrecognizable to long-time residents of the city, and drawing in new groups that have the capacity to support DC’s regeneration, ultimately improving educational, economic, and, yes, cultural opportunities for those who have lived there well before.

On Sunday, arts innovators Sandro and Tati of Art Soiree Co. celebrated their First Anniversary in style among supporters of their endeavor at Buddha Bar.

If you didn’t hit all of the festivities (and who could?), the Kennedy Center continues its Celebrate Mexico 2010 theme for the duration of the month, with the Millennium Stage’s free evening concerts spotlighting South of the Border tunes.  As for Art Soiree, my understanding is we’ll be able to count on Sandro and Tati’s biweekly swanky cultural gatherings spotlighting various artists from afar at venues just next door, each time under a new and innovative theme, for some time to come!

Likewise, The Cultural Landscape Foundation’s Launch Party at Room & Board on Thursday was only the kickoff for its upcoming What’s Out There Weekend, which will provide residents and visitors an opportunity to explore 25 free, publically accessible sites in the nation’s capital.  On the weekend of the 25th, What’s Out There Weekend, the TCLF will offer free tours by expert guides to Meridian Hill Park, Pershing Plaza, the Kenilworth Aquatic Gardens, the National Gallery of Art East Building Plaza, Rock Creek Park, Congressional Cemetery, and other cultural landmarks.

Looking at the coming weeks, our Culture beat truly runneth over with fabulous, and often free, options.  Among them, the Phillips Collection is free all month, but gratefully accepting cell phone donations to support fire-related facility repairs, and the National Museum of Women in the Arts continues to be free on the first Sunday of each month.

We’ve marked our planners for the annual Turkish Festival in Freedom Plaza and we are anticipating the third Opera in the Outfield, a cultural collaboration between DC Commission on Arts and the Humanities,  the Washington National Opera, and several generous private sector supporters, including Target and M&Ms (there might even be some colorful candy handouts). The DCAH also had a hand in recent Arts on N and, of course, Arts on Foot.  Perhaps one of my favorite events the calendar-round, Washington Nationals Park, throws open its gates to area residents free of charge on the occasion of a Kennedy Center Opera House simulcast, broadening the appeal and access of the often unfairly dubbed elitist performing art.  This year, we’ll view Verdi’s “A Masked Ball” as little ones play in the outfield. Well done WNO, Nationals Park, and generous collaborators!

Before next week’s fanfare in Washington Nationals Park, which may, incidentally, provide just the opportunity for an evening stroll at Capitol Riverfront’s neighboring new Yards Park and a tour through Department of Transportation’s new lush gardens, we’ll want to lend our vote of support to all these fabulous cultural events and venues that are slowly, but surely, desegregating and revitalizing our communities, providing better opportunities to new arrivals, as well as long-time residents.

Tuesday, September 14th is Election Day in DC and your Greg’s List – DC Culture Editor strongly encourages you to vote before you hit the next soiree, concert, film, auditorium, or street festival.  A heartfelt thank you to our many arts organizers for raising the volume, accessibility, and breadth of what’s out there culturally in DC; this emerging cultural landscape has made the city an even more splendid place to call home.