Achieving our Fullest Potential at the Apareció Launch 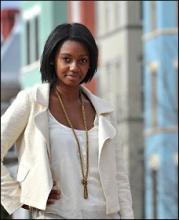 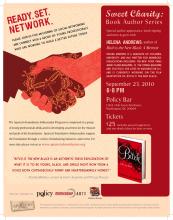 So you thought you had it tough being young and single in the city?  I’ll admit that I did. But now I’m dying to get to Helena Andrews’ new memoir, Bitch is the New Black, (Harper Collins 2010).  In her book debut, Andrews looks at the trials of finding fulfillment as a single, educated black woman in Washington, DC.  The book speaks specifically to a generation of quantifiably successful, qualitatively miserable DC singles, where Sex and the City, The Diary of Bridget Jones, The Devil Wears Prada, and other “quarter-life crisis” novels fall short.  In spite of all that we gripe about dating in DC, Andrews may be the first to put to ink the smart/successful/lonely cocktail that many would say characterizes DC-based women, of any color.

As an outgoing member of the press and ethnic amalgam, I take for granted the relative ease of movement between different cultural cliques in the city, which--despite some major strides during the last few years--are still omnipresent.  But whether I am at an Asian Young Professionals happy hour, a Congressional Black Caucus Week art opening, or a Latino heritage celebration, I witness the recurring theme of Ms. Andrews’ book: Statistically powerful public women impotent in steering their personal lives.

Race remains a serious factor in our city--in its schools, in the economic opportunities for our youth across a still unevenly populated town, and yes, even in our dating scene.  The Apareció Foundation, sponsoring Ms. Andrews next book event, a meet and greet next Thursday at Policy, works to reduce the disparities facing young women in Chicago and seeks DC professionals’ support.

The Columbia and Northwestern graduate, New York Times, O, Politico, Oprah Magazine, and Marie Claire published journalist, now “Single-Minded” columnist at The Root, will headline the DC Chapter Launch of the Apareció Foundation.  You’ll want to purchase your tickets early to support both the Chicago charity and read Ms. Andrews’ chronicles of single life in our city.

The Apareció Foundation was created in March 2009 to promote diversity, accessibility, and fellowship opportunities in Chicago.  It seeks to expand opportunities for low-income, high-potential Chicago public high school women so that they become leaders, think critically, increase their skills and confidence, and are, in turn, able to make cascading positive change.

As increasing numbers of education foundations and school district policies demonstrate in similarly holistic programs across the country, the key to better economic and social integration--in historically segregated cities like Chicago and DC--are the tools that enable a student to obtain a better education.  The Apareció Foundation understands that support for a strong academic start requires a look at the full spectrum of opportunities available to a student and the circumstances impacting her learning–-from her nutrition and physical fitness, to her after-school pursuits, as well as work ethic and study skills that may not be equal to those of a counterpart with highly-educated parental guidance and push toward achievement from day one.

What, beyond her formative years in Chicago, ties this 29-year-old locally-based author to the Foundation’s cause? Both Ms. Andrews’ and The Foundation’s work acknowledge that the paths to some of our chief goals--personal fulfillment and equality of opportunity, among them ---are not paved by superficial or formalistic changes alone.  Just as in Andrews’ memoir, Ivy League degrees, designer clothes, exclusive events, and classy condos do not appear to fulfill the most basic needs of DC singles, juridical desegregation of schools, as put onto the books, has not led to equality for Chicagoan youth-–or their Washingtonian counterparts-–because it simply doesn’t nix underlying problems and self-perpetuating cycles holding back those at a disadvantage.

Tickets will sell out for this mixer of socially-minded “young professionals” (read: single and under 50), so get your tickets here and be on the lookout for Ms. Andrews’ film adaptation of Bitch is the New Black.

A Culture Section A Plus to both Ms. Andrews for her new publication and to the Apareció Foundation for its DC premiere.  And here’s to young girls-– and also us not so young ones-–fulfilling their full professional, academic, personal, and emotive potential, both in Chicago and at home.