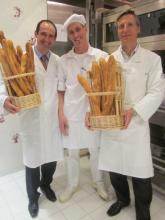 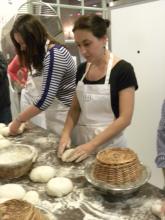 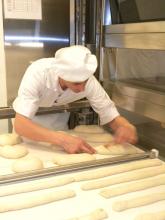 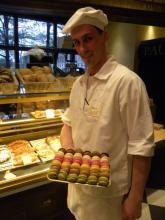 There’s a newcomer to DC, who is sure to fit right into our cosmopolitan community—PAUL. For over 120 years, this renowned French bakery has been serving up artisanal breads, buttery croissants, and delicate pastries. We recently got a preview of the new PAUL location (and U.S. flagship bakery-cafe) set to open here next week, along with a breadmaking class from PAUL’s chief baker and pastry chef, David Dequeker. Maxime Holder (President and CEO of Groupe PAUL) and Philippe Sanchez (President and CEO of PAUL USA) also were on hand to tell us about PAUL’s storied history (In fact, Maxime, who is pictured far right, is a direct descendant of the Mayot family, which started it all with its small family bakery near Lille in 1889.)

PAUL’s traditional bread starts with a few very simple ingredients: organic flour, fresh yeast, sea salt, and filtered water. These are skillfully incorporated together, then slowly proofed to ensure that PAUL’s signature flutes have the nooks and crannies indicative of hearty homemade bread. As chef Dequeker noted, time, temperature, and weight are all key to PAUL’s breadmaking (this is not a pursuit for the impatient!) Once risen, the bread dough is hand formed, docked, and baked until it forms a crusty, golden-brown exterior.

In addition to getting an up-close look at the breadmaking process, we also sampled several of PAUL’s delectable pastries, prepared fresh daily. French macarons, available in a range of colorful flavors, are sure to guarantee PAUL’s popularity. With their slightly chewy exteriors and creamy fillings, they were impossible to resist! Other standout treats included the Anglaise aux Pommes (sliced apples with just the right amount of sweetness atop light puff pastry) and La Gourmandise (a flaky croissant, filled with pastry cream and studded with chocolate chips). PAUL also will be serving up traditional cafe fare, including quiches, sandwiches, and salads. Given its proximity to the Navy Memorial and the National Mall, PAUL promises to be a hit among locals and tourists alike.

Want an introduction? Then stop by PAUL when it opens at 801 Pennsylvania Avenue NW on May 2—or any day after that (it will be open from 7am to 7pm, 7 days a week).  A second area location will open in Georgetown (at Wisconsin and M Streets, NW) in August.

Et faites attention mes amis: rumor has it that PAUL also will be offering breadmaking classes to the public in the future, so keep watching GregsListDC for all the details!