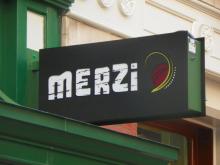 Now open in the heart of the Penn Quarter, Merzi offers a subcontinental twist to the Chipotlesque casual food concept. The word merzi means ‘choice’ in several Indian languages, which is certainly appropriate because you’ll be making a lot of them here. Start by selecting a fresh-baked naan roll, a long-grain Basmati rice bowl, a crisp romaine salad, or a flavorful chaat. Then, top it with a protein (grilled boneless chicken, shredded slow-cooked beef, juicy grilled spiced shrimp, marinated grilled lamb, or Merzi’s special Tandisserie chicken), your choice of veggies, warm sauces, and chutneys.

We really enjoyed the chaat (a mixture of onions, peppers, corn, tomatoes, cucumbers, and garbanzo beans topped with creamy probiotic yogurt, tangy tamarind date chutney, and crunchy Indian sev) topped with moist Tandisserie chicken (a whole chicken piece, cooked rotisserie-style in a subtle blend of tandoori spices). The warm sauces here all come with a kick—from a slight one in the mild Makani sauce to a powerful one in the hot Masala sauce. Chutneys range from a mild sweet tamarind date chutney to a fiery mixture of red chilies mixed with herbs and seasonings. We can’t wait to try some of Merzi’s extras—including vegetable samosas and potato tikka (crumbled and seasoned paneer rolled into a crunchy potato patty). Wash it all down with a mango fantango (a more flamboyant version of a mango lassi).

Local businessman Qaiser (Kaz) Kasmi, who began his career in the optical technology field, likes the idea of allowing people to experience Indian-influenced cuisine in a fun, casual setting.  Merzi also delivers a catering menu that is well-suited for office meetings or conferences.  Kaz hopes to expand his concept to multiple locations (and maybe even a food truck!) in the future. He has several lighthearted promotions planned for 2011, including campus scavenger hunts that will lead to free Merzi food items and tee-shirts emblazoned with punny slogans like “chaat your mouth” and “support naan violence.” With ideas like these, Kaz is making sure that dining at Merzi won’t be a “dal” experience!