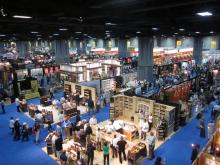 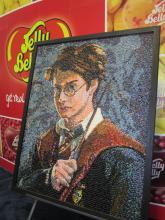 Forget five major food groups—we recently learned how many more truly exist at the 2011 Summer Fancy Food Show. Showcasing 180,000 foods and beverages from 2,400 exhibitors, the annual event (usually held in NYC) made its first DC appearance. Although not open to the public, the show gave us a chance to check out the multitude of new and exciting food products that will be coming soon to a store near you.

We were proud to see so many local-area companies at this year’s show. We met the original “dirtman” of Todd’s Dirt and hobnobbed with the ladies of CookieZen. Dolci Gelati dished up their creamy gelati and sorbetti and Gold Crust Baking Co. showcased its delicious baked goods. TaDah Foods, local makers of falafel wraps, caused quite a stir with their fun marketing approach (see more below). We also chatted with Silence Tea founder Camelia Darroodi about her soothing caffeine and preservative free tea. (You can catch up with her next at the 2nd Annual Yoga Challenge).

Snacks abounded at the show, including chips made of whole grains, corn, hummus, lentils, and popcorn. One of our favorites? Smart Puffs baked with real Wisconsin cheddar. At 150 calories per generous serving, they are crispy, puffy, and satisfying. They also are all natural, gluten and trans fat free, and contain no preservatives—now that’s smart. We also dug Funky Chunky pretzels (a sticky mix of pretzels, caramel, chocolate, and pecans). They are chewy, crunchy, salty, and oh-so indulgent!

There was plenty of candy to be had at the show, but Bissinger’s tiny lemon ginger yuzu gummy pandas won us over. Their lemony freshness and zing of ginger made them almost as popular as Mei Xiang and Tian Tian.

We’re suckers for crispy cookies, so two featured at the show got our attention. Banana Slims are banana bread crackers (yup, you read right!) Thin and crispy, they taste like a banana-y Biscotti and are only 100 calories for a package of two.

Moravian cookies from Salem Baking Co. also were standouts. They come in a wide variety of flavors (tangerine orange, ginger spice, and key lime, to name just a few) and can be topped to create unique appetizers (our personal favorite is the meyer lemon smeared with brie and fig preserves.)

We went nuts for the many varieties of nuts at the show. One of our favorites were Sunny Seed Drops—tiny sunflower seeds encased in a chocolate candy shell that come in a rainbow of colors.

We didn’t find a lot of seafood at the show, but Hancock Gourmet Lobster Company’s buttery Lobster Risotto on the Half Shell was worth seeking out. (We weren’t the only ones who loved it, the product also won a Gold Sofi!) We were charmed by president Cal Hancock, who was very humble about her victory over chef Bobby Flay in the lobster mac and cheese throwdown.

There were plenty of tasty beverages at the show, including Maresi’s smooth and creamy Vienna Ice Coffee, conveniently packaged in a plastic cup with its own straw, and Honest Tea’s new Honest Cocoanova, a desserty drink in three flavors (cherry, mint, and mocha) that’s a mere 50 calories per bottle. We were entranced by the beautifully packaged Kusmi teas and were giggly after sipping the delightfully fizzy and fruity Frizzante’s Happy Apple, which is sourced primarily from local farmers in the Shenandoah Valley.

Cheese was another major food group at the show, but we forgot about all the others once we tasted Cypress Grove Chevre’s Truffle Tremor (earthy truffle flavor in a velvety ripened goat milk cheese) and Humboldt Fog (soft and slightly tangy) varieties. FAGE’s dense and creamy Greek yogurt with sweet honey was another fan favorite.

The show also highlighted some of the weird, wacky, and wonderful—here are a few of our favorites:

We were intrigued by BLK—Canadian spring black water, turned black with the addition of fulvic acid. The fact that the product is endorsed by New Jersey Real Housewife Caroline’s son, Albie admittedly might have had something to do with our curiosity. (Indeed, several of the Housewives were spotted at the show.) Aloe Water was surprisingly refreshing (once we adjusted to its gel-like consistency) and came in a variety of fruity flavors (cherry, pineapple, and mixed fruit).

We were almost fooled by Cavi-Art, a faux caviar product made from seaweed. One nice surprise? The product is tasty (we tried both the black lumpfish Cavi-Art and the new Belug-Art line) and most varieties are completely vegan and cholesterol free. TaDah Foods hired President Obama impersonator Reggie Brown to hold a faux press conference around its booth. We think that a few of the international tourists might have mistook him for the real thing!

Seattle Chocolates offered up chocolates in a variety of summer cocktail-themed flavors: Margarita, Mimosa, Appletini, and Lemondrop. We loved the creamy Margarita one—cool white chocolate with a dash of salt and a hint of lime.

We marveled at artist Kristen Cumings' jelly bean portrait of Harry Potter (made entirely from 14,000 of Jelly Belly’s Harry Potter-themed Bertie Bott’s Every-Flavour Beans). You can check out its companion pieces at the Masters of Jelly Bean Art exhibit at the Indianapolis Children’s Museum.

The cake decorating products from Duff, star of Food Network’s Ace of Cakes, are a great way to jazz up your baking (watch out Martha Stewart!). We can’t wait to try the Duff Animal Skins Cupcake Tattoos available at local Michael’s stores.

It often feels wasteful to use and toss plastic utensils, so we were happy to see that several exhibitors were using Ecotensil’s EcoTaster mini tasting spoon. Just pinch the corners together to form a simple cardboard spoon that is renewable and biodegradable.

Once the show ended, the real work began: volunteers from DC Central Kitchen went to work harvesting the over 100,000 pounds of food donated by the show’s exhibitors—one of the largest donation in the kitchen’s 20+ year history. Now that’s the icing on the cake!

To see more pictures from this year's show, click here.