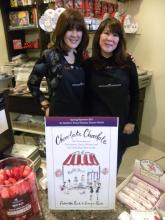 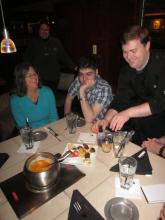 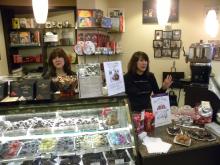 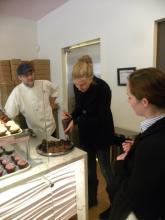 The funk band Parliament may have dubbed DC the Chocolate City in the 1970s, but DC Metro Chocolate Tours is giving the city’s nickname a whole new meaning! Led by a guide who knows all things chocolate, the tour offers a unique way to entertain out-of-towners or a group of fellow chocoholics. We recently checked out its Dupont Circle chocolate walking tour, which took us to several of our favorite chocolate-centric spots.*

At Hello Cupcake, we had the chance to sample rich, chocolately minicupcakes—and even tried our hand at piping frosting on a few. A stop at The Melting Pot had us dipping fresh bananas and strawberries, rice crispy treats, two kinds of cake (pound cake and cheesecake), and plump marshmallows into three types of chocolate fondue. The decadent dark chocolate with frangelico was tops with our group, but the white chocolate crème brulee fondue was a close second!

The tour’s highlight, however, was a stop at Chocolate Chocolate, owned and operated by sisters Ginger and Frances. Some could say chocolate is in their blood—as a girl, their mother fled from North to South Korea during the onset of the Korean War and sustained herself on HERSHEY’s milk chocolate bars purchased on the black market! The sisters documented her harrowing tale in their first co-authored children’s book (yes, they are accomplished authors too!), My Freedom Trip. (Now 81, Mama Park occasionally works with the sisters, and is the secret behind their beautifully crafted Easter baskets.)

Ginger and Frances started Chocolate Chocolate over 25 years ago, following the sudden death of their father. At that time, imported European fine chocolates were hard to come by, even in the Chocolate City. Frances and Ginger worked hard to bring these rich bonbons to DC, and their chocolate boutique is now a mecca for chocolate lovers from across the country. The sisters also blossomed into prolific authors, writing several more acclaimed children’s books (Goodbye 382 Shin Dang Dong, The Have a Good Day Café, The Royal Bee, and Where On Earth is My Bagel?) and several adult novels (To Swim Across the World and When My Sister Was Cleopatra Moon).

During our stop at Chocolate Chocolate, we sampled a variety of the sisters’ delectable treats, including their exquisite truffles—the only chocolate that Ginger makes by hand, in house.  These rich, dark morsels (dusted lightly with cocoa powder) are a chocolate lover’s dream!

Want to learn more about this sweet stop and the dynamic duo behind it? Then RSVP now for their book launch party (featured on GregsListDC!), where you’ll enjoy complimentary chocolate and sparkling wine while meeting the sisters. Their new book, CHOCOLATE CHOCOLATE: The True Story of Two Sisters, Tons of Treats, and the Little Shop That Could, will be available for purchase and signing. Talk about sweet success!

* Specific stops are subject to change. Other routes include the “Uptown” tour (Dupont, Adams Morgan, and U Street) and the new Georgetown tour.