Boxwood Winery: A Marvel in Middleburg 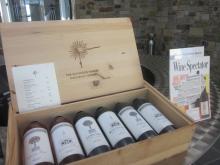 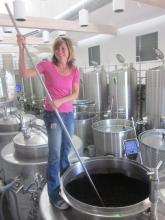 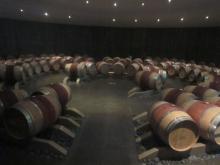 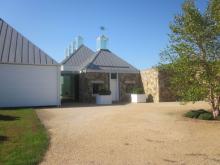 Virginia has long been known for its wine and horse country. What better way to spend a beautiful fall weekend than experiencing them both?

Start your journey at Middleburg’s Boxwood Winery. The property once served as a horse farm, owned in the early 1900s by General Billy Mitchell (otherwise known as the father of the Air Force) who lived there until his death. In 2001, John Kent Cooke Sr. (son of billionaire businessman Jack Kent Cooke) and his wife Rita purchased the property and began winery development, planting grapes under the careful guidance of viticulturist Lucie Morton.

Rachel Martin, Executive Vice President of the winery and the owners’ daughter, gave us a tour. She oversees the vineyard, winery, and national and international sales. No stranger to the wine business, Rachel studied Viticulture and Enology at Napa Valley College and Sensory Evaluation at the University of Bordeaux (School of Enology). In 2006, she convinced internationally renowned vigneron consultant Stéphane Derenoncourt to visit Boxwood and quickly won him over—Boxwood became his first U.S.-based client. The 170-acre property currently hosts 16 acres of vines and produces five French-certified grape varieties: Cabernet Franc, Cabernet Sauvignon, Merlot, Petit Verdot, and Malbec. More grapes (Cabernet Franc and Syrah) will be planted this spring and then again in 2013.

Award-winning architect Hugh Newell Jacobsen (who also has had a hand in not one, but two Smithsonian museums) designed the winery’s interconnected structures, with the advice of Dr. Richard Vine, Professor of Enology at Purdue University. Completed in 2005, the winery’s exterior blends easily with its surroundings; the cool stone interior is sleek and modern.  In fact, it was just featured in the fall issue of Entra Magazine for Design and Architecture.

We watched as workers carefully harvested Cabernet Sauvignon—the last grape to come off the vine (all grapes used in Boxwood’s wines are grown on the property). The grapes then are hand sorted, destemmed, and fermented as whole berries (not crushed) in 13 customized stainless steel fermentation tanks. As the grapes ferment, they must be “punched down” every two hours (a total of eight times for each batch). This manual process pushes the grapes into the developing liquid, which bubbles like a witches’ brew as the grapes’ sugars are released. Once fermentation is complete, wine is pumped through stainless steel pipes into 100 percent French oak barrels nestled in the hillside cave room, a temperature- and humidity-controlled space bathed in a warm, soft glow. After aging for up to a year, the wine is pumped to the bottling room, where glistening state-of-the-art Italian machinery fills, corks, and labels the bottles on the premises. The winery produces a maximum of 2,500 cases of red wine a year (it produced a mere 600 in its first year of operation) in three styles in the Bordeaux tradition: Boxwood, Topiary, and Rosé. We tasted the Boxwood 2007 and the Topiary 2007—both had elegantly rich, fruity flavors. We particularly loved the adorable 375ml half-bottles—perfect for weeknight sipping.

Want to taste Boxwood for yourself? Then make your reservation now for the upcoming winery tour, complete with tasting (additional tours are available by appointment). Prefer to taste Boxwood wines closer to home? Then stop by one of Boxwood Winery’s tasting rooms (in National Harbor, Chevy Chase, Reston, and Middleburg) this weekend as they celebrate the release of the Boxwood 2009 Vintage. Using the high-tech Enoround system, sippers can self-serve 1, 3, or 5 oz. tastings.  Care to sip wine while enjoying some world-class steeplechase racing? Then add some Boxwood wine to your tailgate party at this Saturday’s 74th International Gold Cup Races in nearby The Plains, VA. Virginia is indeed for (wine) lovers!