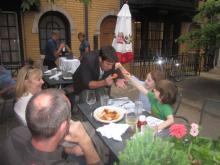 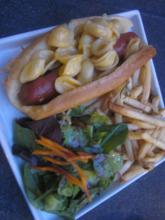 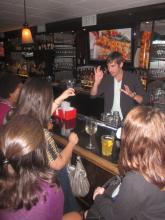 Got a bad case of the Mondays? Then add a touch of magic by heading over to Madhatter’s Magic Mondays. Enjoy half-price bottles of wine while DC’s own Josh Norris—recently named DC’s Best Performing Artist by the Washington City Paper—performs astounding illusions and card tricks tableside from 7pm to 9pm. Come between 4pm and 8pm (Mondays or any weekday), and enjoy terrific happy hour specials, including $3 rail cocktails, Bud and Bud Light beers, and Yuengling drafts; $5 house wines or orange crushes (for grownups only!); and $5 appetizers.

We recently stopped by Madhatter to check out Josh’s act and the fare from new executive chef Freddie Melgar. We sampled one of Madhatter’s famous Mad Dogs, the Wonderland Dog—a plump dog stuffed in a soft bun and topped with creamy shells and cheese. Like things a little simpler? Then try the Queen of Heart’s Dog, topped simply with ketchup, mustard, diced onions, and relish. Best of all, both dogs are only $5 during happy hour.  In the mood for something that will really stick to your ribs? Then dig into Madhatter’s bourbon BBQ ribs, slow-roasted baby back ribs smothered in hickory barbeque sauce and served with mustardy coleslaw and crispy sweet potato or regular fries. Desserts, which change daily, included a decadent lemon berry cake during our visit.

As Josh moves from table to table, a real sense of camaraderie develops among the diners. We struck up a conversation with the interns next to us; a couple on a date visibly relaxed as Josh found their card in his jacket pocket. Magic makes you feel like a kid again, and—before we knew it—we were grinning like Cheshire cats.

After 5 years as an IT consultant, Josh Norris left it all behind to pursue his passion for magic. In his spare time, he’s also president of Metro Event Specialists, a trade organization for the region’s event professionals. We chatted with Josh to learn more about his act as he celebrated its one-year anniversary at Madhatter.

Q: What do you like about doing tableside magic at Madhatter?

A: It keeps me developing new material. In a regular show, you have one chance to do a trick. Here, I’m doing magic for 100 tables a night, so it gives me a chance to work on a trick many times.

A: I often do corporate events where my friends can’t come see me perform. Here, people can stop by and check out my show. I also get to eat here, and have tried practically everything on the menu!

Q: Has anything unusual happened during your performances?

A: I have one trick where people sign a playing card, and sometimes they write some unusual (i.e. risque) things. In those cases, the joke’s on me!