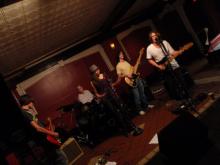 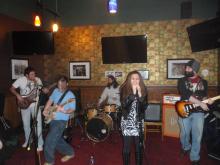 Maic Joyce is a team player.  He’s a musician in The Band House Collective (TBHC), one of the D.C. area’s several networks of music groups. He performs with more than five bands in TBHC, which span genres such as gospel, blues, rock, jazz, and funk. He lives on a farm in Boyds, MD, which is also the collective’s headquarters. He was actually navigating the rainy roads home on Thursday night when we spoke by phone about his music and his role in TBHC.

For Maic, it was a practical decision to move into the farmhouse last May. It is the epicenter of the collective, which formed in the summer of 2010. Maic said that the collective’s sense of musical support also is one of its biggest benefits.

“It’s great for promotion,” he said. “The collective has sponsors that pay for flyers and drinks, and it opens up venues, gigs, and other opportunities. It gives you marketing that is hard to obtain on your own.”

A collective like TBHC also is ideal for creating large events and developing an area’s music scene. Maic and other TBHC members recently put together their first annual Band House Eclectic Fest, a three-day outdoor music festival. Maic said he had helped planned it to be a “socially conscious” event, with principles similar to Burning Man’s.

“It was meant to be more than just a party,” he said. “We teamed up with Washington Animal Rescue League, and asked people to give donations rather than just pay for the show.  We wanted everyone to be a part of the community-- feed people, clean up after yourself, don’t treat people like strangers.”

Unfortunately, the festival was scheduled for August 26-28, and Hurricane Irene forced it indoors to the Second Chance Saloon in Columbia. It also was shortened from three days to one, but the collective still got a lot of good publicity out of it. Outdoor music park Sunshine Daydream and the production company behind Kind Roots music fest both advertised the event, and are currently planning other gigs with TBHC.

“We will absolutely do this again, and other events too,” Maic said.

“Often, one band will pull me away from another band’s show. I have to be in two different places at once,” Maic said.  He added that, although having a promotional network is an advantage, having someone else schedule your shows sometimes feels restrictive.

“It’s like the difference between being your own boss, and someone else being your boss,” he noted.

When he’s not performing, Maic teaches at Bach 2 Rock in Bethesda.  It has a fairly flexible curriculum: Maic, who taught himself some music theory and flamenco-style guitar, said that he essentially teaches whatever his students want to learn.

“I teach people from age 6 to 65,” he said. “I can play a lot of different genres, and we do what they want to do. One guy wanted to learn fingerstyle guitar, so I had to pick it up. It changed my life, because now I play a lot of country.”

Maic will be playing along with Mary-eL, another excellent TBHC musician, September 21 in Falls Church, VA.  A Rarely Mellow Blue, Maic’s funk/blues/rock outfit, also will be playing with Naylor Court  November 19.