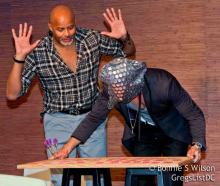 You’ll be amazed, astounded, and entertained after spending an evening with DC’s own acclaimed magician Josh Norris. In his new 90-minute magic show, THINK: An Evening of Mind Reading and Magic, now playing at the Hotel Helix, Josh reads guests’ minds by using subtle clues to draw a whole range of inferences that are spot on—you may even be tempted to try it yourself! His show incorporates a lot of audience participation and, even if you don’t end up on stage yourself, you will feel completely immersed in the show.

Josh is an immensely talented and skillful entertainer—a true master of illusion and misdirection who also mixes in a bit of hypnotism, psychology, and humor. There are tons of surprises (I can’t tell you about them for fear of spoiling the fun) but, believe me, after an evening with Josh you will truly believe in magic. Wanna pull a rabbit out of your hat? Each show will give one guest a chance to win $1,000 in cash!

Not surprisingly, most of Josh’s upcoming shows are already sold out, but you can still get tickets for his shows on September 21st and 28th. Each show starts with a cocktail hour, giving guests an opportunity to mix and mingle while being entertained by card tricks.

Tickets and other information are available here. Here’s a cool trick—enter discount code “gregslist” and get $10 off! Get your tickets now before they disappear!

Show Extended Through October 27th. (Will there be another marriage proposal?!?)