All the Single Ladies (and a Few Men)! 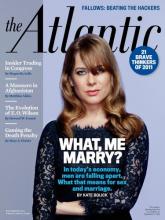 Just days before Valentine’s Day, about 500 of Washington’s most eligible bachelorettes (and about ten men) could be found at the Sixth & I Historic Synagogue for a seminar featuring Kate Bolick, Hanna Rosin, and Garance Franke-Ruta who talked about romance, family, and the end of “traditional” marriage.

Kate Bolick, of course, is the author of “What, Me Marry?: All the Single Ladies” which appeared as the cover story for the November 2011 issue of The Atlantic and quickly became one of the most read articles in the country.  In the article, she describes the trials and tribulations of making a choice to remain single in a world where the expectation seems to be that all young women should strive to get married. Hanna Rosin has written “The End of Men,” among other things, which argues that changing work requirements combined with the decline of blue collar jobs play to women's strengths. These trends and the fact that more women than men are pursuing college degrees, argues Rosin, bring into question the traditional view of marriage.  Garance Franke-Ruta is a senior editor at The Atlantic and oversees the Politics Channel and contributed insightful reflections from the perspective of a successful, single young woman.

The discussion was lively, nuanced, and, contrary to what men might think, humorous. Sex, of course, is a key part of any conversation regarding couples and marriage. One of the panel members lightheartedly suggested that lower divorce rates in earlier times may, in part, be attributable to the fact that most women lacked references with which to compare the deed. Today, she suggested, with approbation from the lusty audience, women generally have such orientations prior to marriage. When Kate Bolick suggested that financially successful nerds of her acquaintance, who couldn’t get a girlfriend in high school, are now drunk with power given their easy access to eager women, a young man (who seemed to fit the profile) stood up, presented himself to the ladies, and accepted the good natured applause that ensued. When a questioner suggested that young women, when considering partners, seem to only have a choice between “settling” for an unappealing or unemployed video game junky on the one hand and settling for a “playboy” with a wandering eye on the other, Kate Bolick was quick to point out that such reductionism of complicated human interactions may serve to frame the issue but should not be taken as a truism that applies in most cases. Men, she argued, to some skepticism from the audience, can indeed be multi-dimensional in rare circumstances.

There was an interesting interchange about weddings vs. marriage and about the “wedding fantasy”—which, in some cases, may drive a women’s desire for marriage. Perhaps, we can figure out a way to deliver the wedding fantasy without the marriage for those who are not ready for the latter. The panel members and female audience participants seem to recognize that they stand on the precipice of a new world order, that traditional views of marriage will probably not serve them, fewer will have traditional marriages, they will marry later, and they may be as successful or even more successful economically than their partners. However, they also seem to have the confidence and the optimism to adapt to these new realities and to forge better, stronger, romantic and enduring unions with their men, who, when all is said and done, I am confident are also up to the challenge. If the smart, funny, confident, women who showed up at the event are representative of young American women today, then the state of our union is indeed strong.

If you missed this thought-provoking event, a video recording can be viewed here. And don’t miss the 6th & I Historic Synagogue’s next great event! A calendar of upcoming events is available here!