The Federalist Serves Up Sunday Suppers 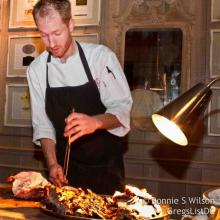 As a crisp chill creeps into the autumn air, nothing warms you like a soul-satisfying Sunday supper. In celebration of its one-year anniversary, the Federalist (adjacent to the Madison Hotel) recently began hosting just what the doctor ordered, skillfully prepared by chef Harper McClure.

Each month, chef McClure will feature a different protein, focusing on locally available and sustainable meats and poultry. Indeed, the suppers reflect the chef’s commitment to family farming, with a portion of the meal’s proceeds donated to support farmer assistance programs.

A variety of savory sides accompany the main dish. We dug into creamy macaroni and cheese, airy whipped potatoes, earthy roasted cauliflower, and housemade pickled vegetables. An assortment of breads and rolls, which you can generously slather in rich, creamery butter, round out the meal (as a testament to his time at Vidalia, chef McClure makes a killer cornbread!) Wash it down with your choice of lemonade or iced tea.

If you still have room for dessert, spring for one of chef McClure’s classic creations. We swooned over the syllabub, a traditional English dessert that has appeared on the Federalist’s menu since its launch. The fruit changes seasonally, with its current incarnation featuring an Asian pear delicately stewed in cream and wine and crowned with an ethereal froth. Another standout? The warm carrot cake—light, cakey, with just a hint of sweetness, it is freshly baked to order (allow 20 minutes of lead time) and contrasts nicely with its rich cream cheese ice cream and sprinkle of black walnuts.

Want a seat at the table? Then reserve now to save your spot! Football fans, never fear—the Federalist will be airing Sunday Night football games on flat screen TVs in its enclosed patio.

*Local foodies should be quite familiar with EcoFriendly Foods and Bev, who has become a rock star in the sustainable food movement and a fixture at the Dupont Circle FreshFarm Market. He is a protégé of Joel Salatin of Polyface and both were heavily featured in Michael Pollan’s bestselling book, The Omnivore’s Dilemma. EcoFriendly Foods processes meat and poultry for a network of local farmers, each of whom raise pasture-fed, hormone- and antibiotic-free animals.