Much to Celebrate at Elisir 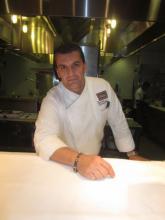 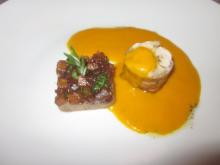 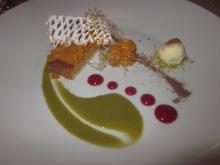 Elisir marks its one-year anniversary next week and chef Enzo Fargione (formerly of Teatro Goldoni) is making sure the season is one to celebrate!

We recently experienced chef Fargione’s tasting menu (which changes seasonally), available in five or seven courses with optional wine pairings. The fall menu presentation starts with a charming amuse bouche: an egg shell cup, filled with a rich gorgonzola panna cotta and port-poached pears. Breads here are accompanied by a trio of olive oils from Liguria, Tuscany, and Sicily, each matched with a house-infused sea salt (the flavors include basil, Chianti, and black olive.) Next up, a porcini dusted venison carpaccio—razor thin disks of raw venison layered with fresh wild blueberries halves, Milanese-style mushrooms, decadent black truffle slices, reggiano cheese curls, and delicate microgreens, all bathed in an 8-year-old aged sherry. A thick and creamy white asparagus soup (made smoky by crunchy bits of Parma prosciutto) follows, surrounding an island of green asparagus custard with a seared quail egg perched on top. The third course features a spaghettini, blackened with squid ink and made zesty and slightly spicy by its dill, lemon zest, shaved garlic, Sicilian tuna Bottarga (dried and cured roe), and hot pepperoncino. Next comes tortelli—plumped with their stuffing of butternut squash and amaretto cookies (!) and flanked by tender slices of port wine-braised veal cheeks. The fragile parcels swim in a butter sage sauce and are finished with an herby sage froth. The fifth course includes a crispy pan seared striped bass atop a morel mushroom and potato puree and swiss chard leaves, and sprinkled with a spiced apple cider and aged vinegar sauce. The sixth course pairs an herb-roasted rabbit roulade drenched with a Riesling, carrot, and rosemary glaze with an artichoke crepinette (a small flattened sausage) that is topped with braised chestnut puree, and stewed quince. Last but not least? A persimmon almond crostata, coupled with a savory ricotta black truffle gelato, pistachio cream, and a fine dust of espresso and cocoa nibs.

Want to start a new Thanksgiving tradition? Enjoy a three-course pre-Thanksgiving menu a few days before the main event, skillfully prepared by chef Fargione and his team. Today through Wednesday, you can experience a first course (the first three courses above are among the options!), followed by a main course and dessert. Purists can opt for the roasted traditional Thanksgiving turkey or the roasted rack of lamb followed by a slice of sweet potato pie or an individual pecan pie; others might mix it up by choosing the pheasant crepinette or seared rare tuna loin followed by white chocolate mousse. Wash it all down with Elisir’s delicious “Falling in Love” cocktail, which tastes like autumn in a glass (see recipe below). Don’t be a turkey—make your reservation now!

Need to bring something to your friends’ or family’s Thanksgiving Day event? Then pick up one of Elisir’s delicious sweet potato ($22) or pecan pies ($26) in advance.

Want to learn how to make chef Fargione’s cuisine in his homeland? Then join him next fall as he travels for seven days and six nights to Puglia, Italy, where you will tour the countryside by bike, experience the local cuisine, meet local food producers, and enjoy three cooking classes with him in the villa of the Castello Traiano. Andiamo!

A small orange peel (for garnish)

In a shaker, mix the butternut squash syrup, the alcohols, and the chocolate mole bitters. Shake with ice and pour into a martini glass. Flame the orange peel and use it as garnish with the powdered cinnamon.

The tip of a teaspoon of vanilla bean paste

½ cup and one tablespoon of sugar

A pinch of nutmeg powder

In a small pan, roast the butternut squash with the vanilla bean paste, sugar, nutmeg, cinnamon stick, and orange peel until the sugar thickens and the butternut squash dissolves into a dense mix. Add the water and simmer until the liquid reduces by half. Remove the cinnamon stick and orange peel. Run the remaining mixture through a blender until it is fine and smooth. Filter the syrup through a fine meshed colander.