Béarnaise: From Paris (and Montréal) with Love 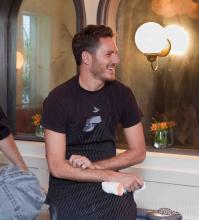 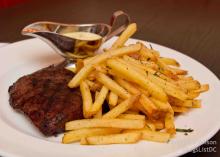 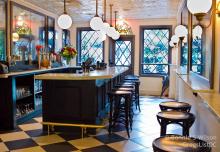 Top Chef Alum Spike Mendelsohn is taking over Capitol Hill (or at least a block of it)! Today, he will open his third DC-area restaurant, Béarnaise, in the 300 block of Pennsylvania Avenue, SE. The restaurant, which marks his first venture with his sister Micheline, draws its inspiration from both sides of the Atlantic: Canada and France. We recently got a sneak preview of Béarnaise’s space and menu.

Designed to suggest a Parisian bistro, the restaurant offers French touches throughout. An old Parisian safe functions as the host stand and a French bulldog statue greets you by the door. Micheline and Spike traveled both at home and abroad to acquire the artwork that graces the restaurant’s two levels. Upstairs, a striking Rousell portrait of Coco Chanel presides over the dining room; downstairs, a panoramic photograph of the Paris metro by Larry Yust bedecks one wall of the private dining room. Wrought iron railings, suspended globe lights, and black and white checkerboard tiles complete the oh-la-la look.

The menu draws its inspiration from L’Entrecôte in Paris and L’Entrecôte Saint-Jean in Montreal (Spike’s birthplace.) A classic steak frites place, it offers a fixed price menu that includes a choice of a first course (house salad, French onion soup, or soup of the day), a second course (flat iron steak, ribeye, or filet), a choice of sauce (Béarnaise Maison, Spicy Béarnaise, Au Poivre, Bordelaise, or Maître D’Hôtel Butter), an artisanal French baguette, and unlimited fries ($28-$42, depending on steak option)* Additional appetizers, side dishes, cheeses, and desserts are available à la carte. Beverages include $10 French-inspired cocktails and wines by the glass, a nice list of $40 bottles of wine, and a “Spiked” punch (which will be made daily with seasonal ingredients and housemade syrups).

We started our meal with the French onion soup. Melted cheese cascaded over the sides of the porcelain crock, yet the soup’s surface had a lovely crust.  Below, the flavorful broth avoided the heavy salinity common to this dish. The soup was followed by the Steak Maison: an 8-oz flat iron steak with our sauce choice: the Maître D’Hôtel Butter sauce. Nicely grilled, the steak retained its juiciness, which was highlighted nicely by the herbed butter sauce. Fries (or frites) will be the big draw here—crisp, golden, and flecked with seasonings, they are impossible to resist. We also sampled a few of Béarnaise’s side dishes. Brussels sprouts covered in (what else?) Béarnaise sauce and the thick, juicy slabs of meaty roasted Portobello mushroom with scallions were standouts. For dessert, we savored the densely layered dark, milk, and white chocolate mousse topped with airy whipped cream and rich chocolate crumbles.

Want to put a little Béarnaise in your belly? Reservations can be made by calling the restaurant at 202-450-4800 or e-mailing info@bearnaiserestaurant.com. Or try Spike’s recipe for Béarnaise sauce below. And keep les yeux ouverts for August liqueur tastings in Béarnaise’s bar. Àvôtre santé!

Directions: In a medium-sized saucepan, melt the butter over medium heat.  In a separate medium saucepan, boil the shallots, peppercorns, and tarragon in the vinegar and wine over medium heat. Allow it to reduce to ¼ cup. Strain into a double boiler. Whisk the egg yolks into the vinegar mixture. Place the top of the double boiler over simmering water. (Be careful that the top of the water is below the bottom of the top of the double boiler.) Continually whisk. As soon as the egg yolk mixture thickens, remove from heat and the water. Continue to whisk constantly. Turn off the heat. Put the mixture back above the hot water. The butter should be approximately the same temperature as the yolks, to prevent the sauce from breaking. Slowly whisk in the melted butter, salt, and cayenne pepper.

*Viewers of Life After Top Chef may recall an episode in which Spike and his mother locked horns over whether Béarnaise would serve cold butter. (Butter was not served with our meal, so the jury is still out on that one!)