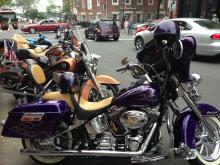 Photographs 1 and 4 by Chris Ley

This Memorial Day weekend, we hit a variety of events in our 2013 Chevrolet Volt, courtesy of the GM East team.  Zipping between events was easy, as the Volt’s electric propulsion system allows it to reach a test-track speed of 100 miles per hour (we didn’t go quite that fast).  Our first stop? The Memorial Day Weekend Sale at Urban Chic boutique. We saved a bundle, and the Volt’s roomy 10.6 cubic feet of trunk space gave us plenty of room to store our sassy sundresses. You can also save money on the Volt, which qualifies for a federal tax credit of up to $7,500.

Memorial Day BBQs are as American as apple pie, and this weekend was no exception. We cruised by the Hinge Memorial Day BBQ Extravaganza, where guests played cornhole, posed in the photo booth, and sampled a variety of BBQ items. While we didn’t meet a new love interest there, we were in love with our Volt’s sleek shape and stylish interior.

All this driving around helped us to work up a thirst, which we quenched at the Memorial Day Patio Happy Hour at Boqueria. Our Chevy Volt didn’t need a fill-up—its battery goes a full 38 miles before switching to gasoline, and it gets a combined electric and gas mileage of 62 miles per gallon equivalent. Recharging is easy, as it can be plugged in to any standard electrical outlet.

We mustn’t forget that the true meaning of Memorial Day is to honor those who died in service to their country. We stopped by the U.S. Navy Memorial to attend Rolling Thunder’s Wreathlaying. The roar of the motorcycles was in stark contrast to the Volt’s whisper-quiet running sound.

We ended our day with a stop at Gravelly Point Park, just outside the perimeter of Ronald Reagan Washington National Airport. The technology aboard the jets flying overhead was no more sophisticated than that aboard our Volt, which features the MyLink high-res color touch screen with Bluetooth streaming audio.

Want to check out a Volt for yourself? Then stop by Crystal Car this Fathers’ Day, where Vornado will showcase its Chevrolet Volt fleet and new charging stations.