Still Mellow After All These Years: Mellow Mushroom Turns 40 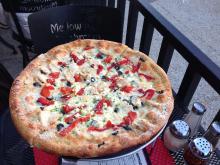 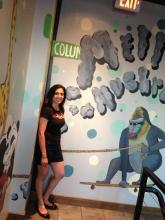 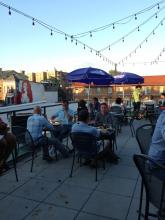 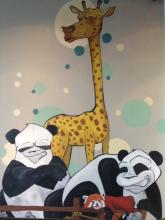 Founded by three former college roommates (and self-described hippies!), Mellow Mushroom first took root in Atlanta in 1974. Since then, Mellow Mushroom locations have sprung up in 170 locations in 18 states. Mellow Mushroom encourages individuality among its outlets, allowing owners to create their own signage, décor, and specials. Local “friendchise” owner Pooja Mehta (pictured here) has taken that to heart, decorating DC’s Adams Morgan location with a detailed, server-drawn mural that pokes fun at last year’s search for Rusty the elusive red panda (found, incidentally, in Adams Morgan), original artwork, and a suspended vaudeville sculpture.

We recently visited the location to sample some of Mellow Mushroom’s signature offerings on its streetside front patio. Since it is known for its unique pizzas, that provided our starting point! Mellow Mushroom’s artisan pizzas are prepared on what it calls a “Southern-style” crust—something between a deep dish and a thin Neapolitan.  The unbleached wheat-flour dough (but gluten-free options are available) is hand tossed, dusted with cornmeal, and stone baked—then basted with garlic butter and sprinkled with Parmesan cheese. The pie’s rustic crust bakes up light and tasty; you definitely won’t leave these crusts on your plate! We savored the Mellowterranean, a colorful pie topped with chunks of all-natural grilled chicken, sliced onions, roasted red peppers, black olives, chives, and feta and part-skim mozzarella cheeses, served with a side of creamy tzatziki sauce. Other options range from vegan (by request) to meat lover (Mighty Meaty). Plump calzones give you more crust to enjoy, and are big enough to feed two.

Wash down your meal with a variety of craft local, regional, and international beers. Mellow Mushroom’s beer cluballows members to win prizes, recognition, and (of course) more beer. Happy Hour is happy indeed, as it offers $4 draft beers and rail drinks and $3 house wines accompanied by food specials each weekday from 3-7pm (one of the longest happy hours in the city!)

Wanna mellow out yourself? Then, get yourself there this Wednesday, when Mellow Mushroom locations will be selling certain special menu items at 1974 prices to celebrate its 40th anniversary as part of its Way Back Wednesday Celebration.  Specials include a small cheese pizza for $2.50, Coke products for 30¢, and beer (Budweiser, Michelob or Pabst Blue Ribbon) for 75¢! While there, make sure to the Way Back Photo Contest by posting a picture of yourself with the Original Mellow with the hashtag #40yrsbaked on Instagram or at the 40yrsbaked website.  You could win a VIP vacation to (where else?) Amsterdam!