The Light (and Dark) Side of Maggiano’s 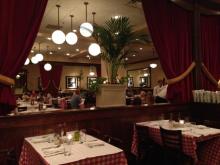 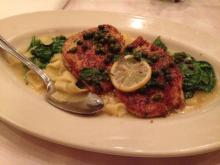 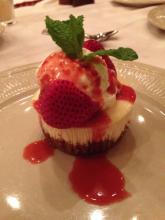 Most people are familiar with Maggiano’s—the Italian eatery with almost 50 locations throughout the country. Known for its big portions and family-style dining options, it typically caters to those with hearty appetites.

So we were pleasantly surprised when we were recently invited to taste Maggiano’s new Lighter Take menu. It offers 11 items, each with a third to a half of the calories of its “regular” entrée counterpart. Although portion sizes are slightly smaller (for example, two pieces of chicken breast instead of three), much of the caloric savings comes from the use of healthier ingredients, substitutions, and less butter. Maggiano’s went to great lengths to test out these items, previously staging a soft opening of a faux pop-up restaurant in Chicago to get customers’ reactions.

We started our meal by splitting a side rather than a full order of the chopped salad—fresh salad greens topped with avocado, tomatoes, blue cheese, and crispy prosciutto (which can be held to further lighten the meal). We sipped glasses of happy hour* Coppola white wine to keep the calorie count in check. Our entrée selections included two new Lighter Take options: the Veal Piccata (680 calories vs. 1150 calories in the regular version) and the Shrimp Fra Diavolo (400 calories vs. 800 calories in the regular version). The veal is breaded in a lighter coating (made from finely grinding panko breadcrumbs with lemon zest and parsley) and seared in olive oil along with roasted garlic, capers, basil, white wine, and lemon juice.  It’s served atop hand-cut fettuccine, which replaces the traditional Spaghetti Aglio Olio.  The Fra Diavolo (plump, pan-seared shrimp with garlic and tomatoes, nestled in a bed of hand-cut fettuccine and bathed in spicy tomato sauce) was less obviously different than its sister entrée, but still packed the flavor that we’ve come to expect from the regular version. Both items were tasty and satisfying, while still leaving us with room for dessert. Speaking of which, in keeping with the night’s theme, we ordered individual-sized portions (only $3.50 each!) of two of Maggiano’s signature desserts: New York Cheesecake (topped with fresh strawberries and mint) and Crème Brulée.

Wanna lighten up yourself? Then try a Lighter Take entrée at one of Maggiano’s DC-area locations (Columbia, Chevy Chase, or Tysons) or stop by the new Maggiano’s location that opens tomorrow as part of the grand opening of the newly renovated Springfield Town Center. You can download a printable coupon for $5 off your Lighter Take selection here. Or join Maggiano’s E-Club e-mail list and get a $10 off coupon now, on your birthday, and on your anniversary (or other special day of your choosing).

Want to see Maggiano’s dark side? Then make a reservation now for tomorrow night’s Murder Mystery Dinner, called The Calamari Curse, one of the Chevy Chase location’s periodic nights dedicated to murder and mayhem. Being bad has never tasted so good!