Fashion Gets Unleashed (for a great cause) for the 9th Annual Fashion for Paws! 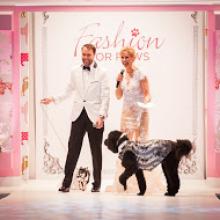 The Washington Humane Society (WHS) hosted the Fashion for Paws 9th Annual Runway Show (F4P) and fundraiser earlier this month at the Grant Hyatt Washington hotel, and raised over $400,000 in support of WHS' animal services and programs in the District of Columbia!  As one of DC's most popular annual events, participating  F4P models raise a minimum of $3,000 to secure their spot on the runway in hopes of being named the "Model Washingtonian of the Year" by hosting various local events like fundraising happy hours, receptions and shopping events. This year's "Model" honor went to Donald Hoffman with Lynni Megginson as Model First Runner-Up, and Tara Kovalski as Model Second Runner-Up.

This year's event, co-chaired by Gregory Riegle, Poetry Sayer and Dr. Lauren Talarico, also featured WJLA’s Dr. Katy Nelson and Scott Thuman as co-hosts, and celebrated the life-saving programs and services of WHS, while getting an exclusive look at spring fashion trends for both two and four-legged fashionistas/fashionistos. The runway show, produced by Design Foundry, featured human models showcasing various high-end retailers from Tysons Galleria with hair and makeup provided by Toka Salon & Day Spa. Not to be outdone, four-footed models were outfitted by Regal & POOCH in signature doggie couture! It's a ruff life!

Still can't get enough of the fluff (or ruff)? Then head on over to the 14th Street neighborhood Sunday, May 17 for the Shinola & WHS Pet Event!

(**Note: Images and materials courtesy of the Washington Humane Society).