Reinventing the Thrill of the (Shoe) Hunt: Meet Jodie Fox, Co-Founder of Shoes of Prey “Design Your Own” Studios 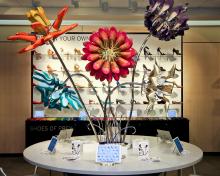 Last month, Nordstrom in The Fashion Centre at Pentagon City welcomed the launch of the Shoes of Prey “Design Your Own” studios, founded originally in Sydney, Austrailia by Jodie Fox and former Google software engineer and Google executive (respectively), Mike Knapp and Michael Fox.

The launch was hosted by both Jodie Fox and Janie Bryant, the Emmy Award-winning Costume Designer for Mad Men, who gave attendees invaluable style advice and introduced her new Spring Capsule Collection for Shoes of Prey, “a 60s inspired collection, with 7 bold designs for the modern woman.”  Fox (pictured, top) who is also the brand's Fashion Director, came from the world of advertising and law, and now uses her skills and sense of style to help women around the globe find the most beautiful heels possible.

Read on for more on our interview with Jodie Fox, who discussed the Shoes of Prey concept and its Co-Founders, the Janie Bryant Capsule Collection, as well what’s in store for the global custom shoe brand!

Q: What was the inspiration for the brand? How did the "Design you Own Shoe" concept come about?

Jodie Fox: I was solving a problem of my own - I'd always liked shoes, but I never loved them because I couldn't find exactly what I was looking for. Either it wasn't quite the right colour, there was an embellishment I didn't like, not quite the right heel height. Anyway, when I was travelling, in the same way that you find someone who will make a custom suit for you, I found someone with whom I could commission shoe designs. My shoe collection became really exciting, and my girlfriends asked me where I was getting my footwear. When I explained, they asked me to create shoes for them too. Concurrently, my two Co-Founders, Mike Knapp and Michael Fox were at Google and becoming really excited about the opportunities in online retail. They just needed an idea. We all came together and Shoes of Prey was born.

Q: I see that you have a background in law and advertising, very interesting transition! What was that transition like?

JF: I plucked up the courage to make the jump from law to advertising after I received a brief that just absolutely made my heart sink so moving away from law was easy. Going from advertising to Shoes of Prey was daunting at first, but during a long lunch with Mike and Michael, we realised collectively that we needed to fail fast if we were going to fail, and failure wasn't all that scary. But, "what if" was incredibly scary, so again, the transition was relatively easy.

Q: Describe a bit the Janie Bryant Collection?  What can customers expect to see from the collection?

JF: This is Janie Bryant's second capsule collection with Shoes of Prey and we're thrilled to work with the designer who captured the heart of the nation with her Mad Men costume design.  This collection is inspired by the late 60s using stacked heels, platforms, colour blocking and glossy patent leather that Janie likes to describe as "lacquer for your feet".  Although inspiration comes from a decade long passed, the collection is a modern expression of the empowered woman.

Q: What are some future plans for Shoes of Prey (e.g., future stores, collaborations, etc)?

JF: Our immediate plans for the business are to continue expanding our retail presence in the United States. We're thrilled to be partnered with Nordstrom.  We're looking to eventually expand into customizable accessories (handbags and belts) and one day may even look to move into custom shoes for men.

See more of the Shoes of Prey launch at Nordstrom in photos 2, 3, and 4!