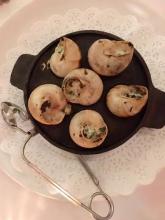 Hakan Ilhan is no stranger to the restaurant business, with a variety of fast-casual concepts, including Einstein Bros Bagels, Pizza Autentica, Café Cantinas, and several airport establishments. But when he decided to branch into more upscale dining a few years ago (first with Al Dente and then with Alba Osteria, both with Roberto Donna in the kitchen), some were skeptical. Now with the recent opening of L’Hommage Bistro Francais and one more restaurant on the way (Ottoman Taverna), Mr. Ilhan has firmly established himself as a restaurateur to be reckoned with.

The décor at L'Hommage harkens back to the Parisian bistros that Mr. Ilhan frequented during his time in university abroad. Globe lights illuminate the space, outfitted with red seated chairs and comfy banquettes. Dining room tables are draped in white linens (a rarity in today’s dining scene).

We recently were invited to try some of L’Hommage’s classic French fare. Executive Chef Joshua Laban Perkins (who previously worked at Eric Ripert’s Brasserie Le Coze) mostly stays true to rustic French flavors, while taking a few forays into other parts of the francophone world (His eggplant, for example, is inspired by a North African dish).

No French meal can start without escargots. Here, fat Brittany snails are delicately sautéed in garlic, butter, and parsley and served in the shell. Or try the gougeres—golden orbs of savory choux pastry oozing with warm Gruyere cheese and Bechamel.

Mains also tend towards the classics. Boeuf bourguignon, cassoulet traditionnel, bouillabaisse, and salade nicoise all appear on the menu.  Portions here are large, so order accordingly. We sampled the steak frites—a black Angus hanger steak crowned with maître d’hotel butter, served thinly sliced and accompanied by classic pomme frites and a lightly-dressed watercress salad.  Hearty eaters should choose the choucroute—featuring a mélange of pork, including plump boudin blanc sausage and tender braised and smoked pork. The coq au vin (but of course!) offers three large pieces of dark meat glazed in red wine and flanked by pearl onions, baby carrots, and white mushrooms (with a floret of Romanesco cauliflower for color).

Wine features prominently here (we enjoyed a crisp and bright Roger Champault Sancerre Les Pierris) or enjoy the cocktail of the day, available on tap (ours blended almond milk, raspberry, brandy, and passion fruit). Traditionalists can sip the Gimlet in Paris (Hendricks gin, green chartreuse, and fresh lime juice) or the French 75 (gin, lemon, and prosecco).

Make sure to save room for dessert. New pastry chef Bouchaib (BiBi) Benahmida was enticed over from Delice des Cieux by Maitre D’ Mustafa Fartout to create the sweet treats and breads for the restaurant and its in-house boulangerie and patisserie. We swooned over the smooth and creamy vanilla crème brulee and the mille-feuilles aux pommes (flakey puff pastry layered with sweet caramelized apples and rich vanilla pastry cream). Other standout items available in the patisserie include French staples like Napoleon and decadent chocolate éclairs.

Can’t commit to a full meal? Then stop by the café for a nibble or have a drink at L’Hommage’s charming bar. And we can’t wait for the return of summer (or the continuation of our recent Indian summer) so that we can bask in the sunshine on L’Hommage’s expansive patio. Vive La France!