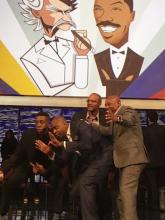 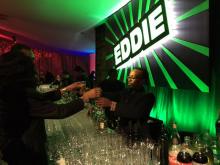 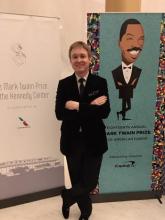 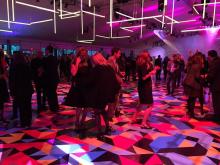 Eddie Murphy is an entertainer in the truest sense of the word. Over his almost 40-year career, he’s done stand-up, acting, singing, writing, producing, and directing. He has won numerous awards for his body of work, including a Golden Globe, a Grammy, and a Screen Actors Guild award, and nominations for a host of others, including an Oscar and several Emmys, to name a few. His comedic style also runs the gamut—from raunchy and politically incorrect (as in his critically acclaimed comedy special Eddie Murphy Raw) to family friendly and heartwarming (in animated films, such Shrek and Mulan).

So we were thrilled to be among those invited by Capital One last night to attend the ceremony at which Eddie Murphy was awarded perhaps the ultimate honor, the 18th Annual Mark Twain Prize for American Humor. At the sold-out event, Eddie was feted by a star-studded lineup of actors and comedians, including Dave Chappelle, Kathy Griffin, Arsenio Hall, George Lopez, Tracy Morgan, Kevin Nealon, Trevor Noah, Jay Pharoah, Joe Piscopo, and Chris Rock. First awarded in 1998, the honor previously has been bestowed on many of comedy’s royalty, including the likes of Carol Burnett (2013), Tina Fey (2010), Steve Martin (2005), and Richard Pryor (1998).

The show began with an introduction by the Chairman of the Kennedy Center, David Rubenstein, promising an evening of fun and laughter. Arsenio Hall then kicked things off, noting that—like the prize’s first recipient, Richard Pryor—Eddie Murphy has mastered all things comedic. He recounted the story of when he and Eddie first pitched the movie “Coming to America” to Paramount and studio execs told them it was missing something. It was then that Eddie had a stroke of genius to have them play multiple roles, something that became a hallmark of his work. Kathy Griffin (calling herself the night’s “diversity hire”) said that Eddie isn’t among those in People magazine’s “stars just like us” section because he isn’t like other celebrities—his mystique “makes Prince look accessible and approachable.” Kevin Nealon riffed on prizes vs. awards, “Aren’t prizes something you get in Cracker Jack or in a raffle?” but added that Eddie takes comedic risks, "just not those like skydiving or taking a Carnival Cruise.” George Lopez recognized that Eddie Murphy “makes us laugh at things that make people uncomfortable, like race.” Chris Rock observed that to call Eddie Murphy a great black comedian is like calling Michael Jordan a great black basketball player.

In one of the show’s heartfelt moments, Tracy Morgan thanked Eddie for being the first person to make him laugh after he awakened from his crash-induced coma. Many of the night’s comedians, including Dave Chappelle, Trevor Noah, and Chris Rock, said that Eddie had inspired them to go into comedy.

In the night’s musical number, Brittany Howard (of Alabama Shakes) and soul man Sam Moore entertained us with their duet rendition of “Hold On, I’m Comin’” accompanied by the stage band, Cracked Ice.

When it was time for the honoree himself, Eddie joked about the fact that the prize entails no money (“they should call it a surprise…the surprise being you ain’t getting no money!”) and did a spot-on impression of Bill Cosby addressing his critics (We’ll have to wait and see how much of that makes it into the final program).

At the after-party, we danced the night away with VIP guests and took a picture in Capital One’s photo booth while sampling an array of sweet treats and an open bar. Transportation home was a breeze, thanks to the Capital One-provided towncar from Elixir Worldwide Chauffeur Services, Inc.

Eddie Murphy took home the prize, but an even bigger winner for the evening was the Kennedy Center’s artistic and educational programs, which will receive the over $2.3M raised at the event.