One Eight Distilling Turns One! 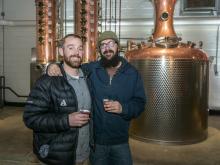 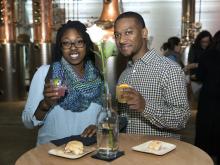 In a quiet part of NE DC sits an inconspicuous warehouse with a modest sign displaying the One Eight Distilling logo. One Eight Distilling is known locally for its District Made Vodka, Rock Creek White Whiskey, and award-winning Ivy City Gin. On January 8th, the One Eight Distilling team celebrated its One Year Anniversary Party, and also lauded being the first vodka distillery in DC since Prohibition. Inside the warehouse, a party was very much alive with music and food for guests to enjoy. The party quickly sold out at the door, with over 200 people in attendance.

“Today is a fun day to know that we got through one year,” said One Eight co-founder Alexander “Sandy” Wood. “Tonight, we are pleased to be featuring the Untitled No. 6, which is a nine-year-old bourbon with a triple cask finish.” The Untitled series featured by One Eight experiments with different barrel finishes and aging, which change its flavor.

Guests bartenders Caroline Blundell (from Ripple) and Christine Kim (from Tico and The Riggsby) were brought in to develop special handcrafted cocktails that highlighted the signature caramel rye flavors found in One Eight Distilling's fine spirits. One of the cocktails, Kim’s “Take a Hike,” featured Rock Creek White Whiskey and offered a surprising, refreshing taste, while achieving a fun balance with a softer finish than the expected dry aftertaste.

In addition, to help celebrate One Eight Distilling’s momentous occasion, music was provided by DJ Neal Becton (owner of Som Records), and guests were welcome to taste Mason Dixie Biscuit Co.’s signature biscuits, which featured Korean pulled pork, turkey, cranberry, and pimento cheese. Spicy Thai chicken steamed buns, from the forthcoming Ekiben opening this March in Baltimore, also were served. Afterwards, dessert was a brown butter caramel bourbon ice cream (made with the Untitled Whiskey No. 6) by Milk Cult, made exclusively for guests.

One Eight Distilling is looking forward to turning two. Throughout the year, it plans to continue its barrel-aging experiments and release new editions of Untitled No. 6. as well as whiskey aged in different barrels for different spans of time. These whiskey forays will be available in limited production for a limited time. In the latter half of 2016, there are plans to feature a new rye whiskey. With these kind of results in a single year, One Eight Distilling assuredly is here to stay, and will continue to surprise its growing fan base.

To see all the photos from this celebration, click here.