Richmond, Virginia is for (Food) Lovers 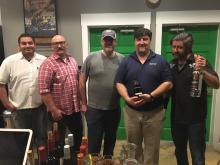 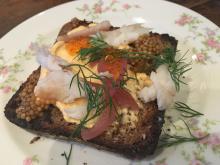 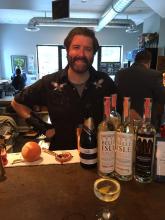 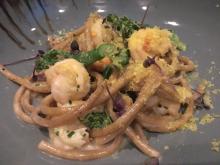 It has been a while since we’ve been to Richmond, VA, so we were thrilled to get a taste of what the city currently has to offer at a recent pop-up dinner at Del Ray’s Stomping Ground hosted by VisitRichmondVA.com. The verdict? Richmond is undergoing a local drinking and dining renaissance that we can’t wait to experience first-hand!

The pop-up started with a sampling of a variety of tasty cocktails, courtesy of Reservoir Distillery and Belle Isle Craft Spirits, and craft brews from The Veil Brewing Co (with fun names like Toof Toof Ache Ache and Child Support). Reservoir Distillery owner and master distiller James Hunter Carpenter and a lifetime friend conceived of the notion of distilling 100 proof bourbon, wheat, and rye whiskies on a lark—they have since gone on to win numerous awards and accolades. Belle Isle Craft distills a “premium” moonshine, handcrafted with 100 percent organic corn. Its Ruby Red grapefruit variety was central to our favorite cocktail of the night, the Ruby Red Fizz (made from Belle Isle Ruby Red Grapefruit, Aperol, and sparkling wine).

Following the meal, Sub Rosa’s brother and sister team Evrim and Evin Dogu shared their insights into the Richmond food scene. They told a touching story about how the community rallied to rebuild their local bakery after a fire devastated it in 2013, raising over $16,000 through an Indigogo campaign. This sense of community pervades their philosophy, techniques, and products.

Want to experience Richmond’s riches for yourself? Then plan to attend Hops in the Park on November 12th in nearby Chester, VA, an event featuring food vendors, live music, a farmers’ market, and (of course) lots of brews, ciders, and meads. And real foodies won’t want to miss Richmond’s upcoming Fire, Flour & Fork—four days of culinary demonstrations, talks, book signings, farm tours, meals, battles, and much more from November 17th to 20th. Use GregsListDC promo code FFF4YOU for $10 off select events (including Thursday's Cornucopia, our Friendsgiving, Friday's Smoke on the Water, and Saturday's Class Pass and Pie in the Sky). Want to taste Richmond on your own terms? Then book a scheduled or private custom food walking tour through Real Richmond Food Tours. Richmond, Virginia truly is for (food) lovers!