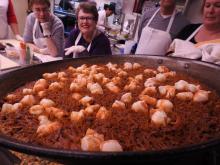 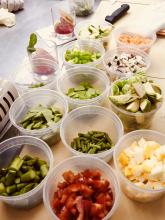 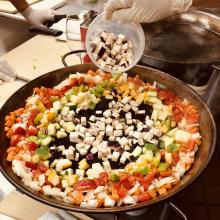 Jaleo Bethesda recently offered an Art of Paella class taught by talented Head Chef Rodolfo L. Guzman. The class featured a hands-on interactive lesson, beverages, and an opportunity to eat the beautiful and tasty paellas following the class. Like all classes hosted at Jaleo’s Bethesda location, the paella cooking class intentionally is kept small to allow each attendee to interact with the chef. Chef Guzman began working with Jose Andres 24 years ago when he opened the original Jaleo and has been a vital player in opening other Jose Andres’ restaurants in the DC area and in Las Vegas.

Paella is a Spanish dish that originated in Valencia. Traditionally, it was cooked only by men on holidays and was made outdoors. You will find variations depending on where you are within Spain. On the coast, they make paella with seafood; within the interior, it is made with chicken, mushrooms, sausage, and rabbit; and the traditional “tourist” paella is made with rice, mussels, and peppers. All paellas are made from two to three main ingredients with the exception of vegetable paella. It is interesting to note that the dish itself is not truly “paella"—that name belongs to the pan in which the flavorful dish is made.

Chef Guzman studied how to make paella in Spain. While there, he had the opportunity to make paella over a wood fire outside. The flavors come out even more when cooked in this very traditional way. (Within our class, we cooked our dishes over a gas stove.) Nevertheless, all three paella dishes turned out delicious!

Cooking classes at Jaleo Bethesda are consistent, reflecting the chef's considerable expertise. They are only offered in the Bethesda restaurant because this location has the largest kitchen. These classes are intimate and are taught in the kitchen used by Jaleo’s chefs, not in a classroom like traditional “cooking” classes. The next class, Shrimp to Share, will take place from November 13th-15th.