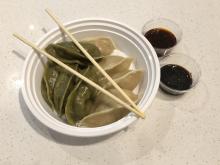 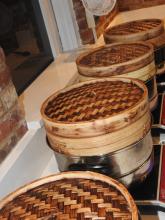 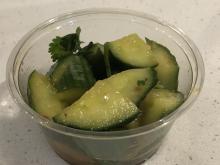 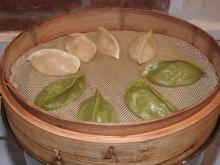 In early November, former consultant and venture-capitalist-turned restaurateur, Patrick Coyne, opened his first fast casual dumpling restaurant, Laoban Dumplings. The concept is meant to recreate the authentic dumpling shop experience that Coyne enjoyed in the Chinese province of Hunan while teaching English to middle-school students. While abroad, he had the opportunity to travel extensively throughout the country, where he found inspiration for his dumpling creations. Laoban means boss in Chinese. Coyne chose this name as an ironic take on the title of a person who is the “boss” of a humble little Chinese dumpling shop. The shop’s design is modern and simple, with exposed brick.

Most of the ingredients used in Coyne’s dumplings are sourced from local farms and all meat is hormone and cage free. Currently, Laoban Dumplings features two types of dumplings at a time. Recently, varieties included dumplings with ginger chicken, scallions, and a hint of honey; Farmers Fancy—made of a variety of eight locally sourced vegetables; Xinjiang lamb—seasoned with cumin and chili flakes and balanced with cilantro; Living on the Veg—made with bok choy, shitakes, scallions, and Chinese chili crisps; and Berkshire pork seasoned with fresh cilantro. These dumplings are all wrapped in a signature Erchui dough. While you are waiting for your dumplings, be sure to try the Cuke Salad made of cucumber and cilantro in a tangy vinaigrette, and their signature cool green tea with organic mint, sweetened with Virginia honey.

Laoban Dumpling’s opening comes after multiple sold-out pop-up restaurants that Coyne held around DC, including pop-ups at Compass Rose and On Rye (now closed). Coyne collaborated with each host restaurant to pair the idea of his delicious dumplings with the concept and ingredients of each restaurant. One dumpling that is highly rated by Zagat was inspired by Shish barak, a traditional Lebanese dish, and was filled with ground beef, pine nuts, spices, and garlic and served with a garlic and mint yogurt dipping sauce.

These delicious dumplings could only better if served as in China, with beer. Thankfully, Laoban Dumplings plans on offering beer and wine alongside their delectable dumplings in the upcoming months. In addition, be on the lookout for Coyne to partner with In Pursuit of Tea to offer four teas sourced directly from tea farmers to pair alongside dim sum on Saturday and Sundays. Drop in for some dumplings today!